Weather refers to any type of weather effect in DF. It includes snow, rain, and special features in evil surroundings.

Weather can be disabled by changing [WEATHER:YES] to [WEATHER:NO] in d_init.txt. Disabling weather is a quick and largely harmless fix to improve framerate on older machines if required.

Dwarf Fortress has three layers of clouds: cumulus, cirrus, and stratus. When using the W key in adventure mode, any number of messages about the weather may appear, and corresponding symbols are shown when c is enabled on the fast travel mode. The types of clouds that are possible are:

Additionally, some unique messages occur when there are clouds in multiple layers:

Otherwise, stratus clouds prevent you from seeing if there are any cirrus or cumulus clouds.

Fog is another aspect of the weather, described separately from the state of clouds when using W. (However, thick fog prevents you from being able to tell what the clouds are like via W.) There are three kinds of fog that may appear:

Normal rain cleans any tile it lands on, removing blood, vomit and other bodily fluids on contact. Any dwarf caught outside when it rains will receive a minor unhappy thought.

When rain hits a tile labeled as a murky pool, it will begin to fill it up with 1/7 water, and if that does not evaporate the water will grow deeper, until the pool is full. Murky pools do not overflow from rain, but this extra water can be drained off and stored or used. (See the Well Guide.) While not much, it can really help maps without 'unlimited' water supplies such as rivers and brooks.

A snow storm has come.

When water comes into contact with a freezing climate, such as winter months in a moderate biome, or at any time in a tundra or glacier, it will freeze into a wall of ice if at least 4/7 deep, or a floor otherwise. Freezing ice acts much like obsidian, and will instantly kill anything caught inside of it -- including creatures otherwise extremely hard to kill. In moderate biomes after winter has passed, ice will melt back into ponds. Ice walls will always thaw back into a full 7 units of liquid, regardless of the original water level, but ice floors will produce the original water depth when thawed. [1]

Dwarves outside during a snowstorm can also freeze to death, so a very high priority when embarking on a glacier is to dig out some place warm for your idlers to rest.

Magma running under snow-covered ground will melt it, but unlike ice, molten snow doesn't turn into water.

In addition, certain regions of the world (if any) can have up to two gusty winds which occur daily - for a brief period of time each morning (3:00am to 7:00am for the first one, 6:00am to 9:00am for the second one), wind strength may be adjusted by +/- 10 on each axis (north/south and east/west), and in the evening (3:00pm to 6:00pm for both) it will be briefly adjusted in the opposite direction.

The combined wind strength (just abs(wind_x) + abs(wind_y)) determines the amount of power the windmill generates: 1-14 wind generates 20 power, 15-29 wind generates 40 power, and 30+ wind generates 60 power (though only for a few seconds, and the opposing gust will likely knock it down to 20 power for a brief moment). If you are in an area with weak wind, a gust of wind can potentially cause the windmill to reorient itself, causing some of the extra power to be lost.

Wind affects the message you get when checking for the weather as an adventurer as well as the amount of power that goes through windmills.

Certain evil surroundings feature freakish weather, such as fogs, clouds, and rains. They may afflict those caught in them with various kinds of syndromes or curses, such as poisonings or transformation into zombies. Names for evil weather are randomly generated, typically something along the lines of "abominable mist", "unholy gloom" (clouds) or "creeping murk", "horrid goo" (rain).

Two kinds of evil weather exist - evil rain, and evil clouds. The type of weather effect and their associated syndromes (if any) are different and randomly chosen for every evil biome in a generated world. There will be at most one weather effect for a given evil biome, sometimes in conjunction with the effect of corpse animation. 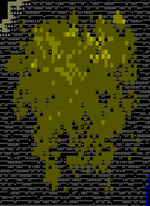 A cloud of haunting fog has drifted nearby!

Evil clouds are made of a generated inorganic gas or dust. They start in one tile and spread out in a similar manner to miasma vapor; when the game announces the cloud's presence, it will zoom into this tile. Evil clouds cause more serious syndromes than evil rains, similar to those of forgotten beasts, titans and demons. Certain evil clouds transform living beings caught in them into dangerous zombie-like thralls, turning them against all life while significantly increasing their strength and toughness attributes.

Evil clouds inflict worse syndromes than evil rains; thralling clouds are especially dangerous in the extreme, as the zombies produced are much stronger than those produced via ambient effects. These undead are very hard to kill and are much stronger than their original forms. Evil clouds have a tendency to roll over your outdoor trade depot and convert traveling merchants into a band of dwarf-hungry savages, which can be quite fun to a fortress reliant on trade.

Thralling clouds are also dangerous in adventure mode. Undead status means hostility from civilized beings, reduced speed and no regeneration. However, other undead will ignore you.

It is raining rotten sludge!

Evil rain can be made of either the blood of a civilized race (dwarves, goblins, etc.) or a randomly generated inorganic substance. Blood rain typically causes no syndromes, only giving whomever caught in it an unhappy thought. Generated substances are more dangerous, causing minor symptoms such as vomiting and fevers, as well as inspiring the aforementioned unhappy thought. Evil rain can also cause wounds and injure dwarves and other creatures caught in them, although the extent of injury depends on the substance. Some forms of evil rain, such as those that cause blisters will lead to instant fun as a blistered brain means death. Cats, birds, and other livestock dying after being exposed to evil rain indicate that dwarves may be next. Dwarves spattered with evil rain will seek a bath after any outdoor work, wasting time and soap. There are rumors of rain composed of other substances, such as alcohol and vomit; however, these seem to be rare.

One of the dangers of evil weather is that ponds will never refill. Store water into underground basins and plan accordingly. Another annoyance is the total lack of wild bees in an evil climate. Though evil rains (excluding rains of blood) usually cause the "milder" types of syndromes, these may still cause death as a secondary result of that syndrome: e.g. suffocation from blisters, dehydration from chronic nausea.

Some evil weather effects condense on creatures, making their effects semi-permanent - symptoms won't go away until the source is washed. Those effects also can spread like a disease. In most cases, it will just infect dwarves that carry contaminated bodies to caskets. Thralling dust clouds, however, can quickly lead to an unstoppable zombie apocalypse if the dust is not completely washed off somehow.

Movement of evil weather and safeguarding

Evil weather forms within about 30 tiles of the edge of the map (or edges of evil biomes within the map), and moves about the screen in one direction as the wind blows. Their structure is a series of miasma-like bursts of cloud that are spawned along the path of the cloud's invisible center. Because the clouds inflate similarly to miasma and because the direction they move in is random, they can very quickly dissipate, fly out of the map immediately, carry on at a steady pace, or spread rapidly to engulf very large areas. They will not, however, change direction.

Clouds pose a serious threat to dwarves (and from there, entire fortresses), even if your citizens seem to be inside safe structures. However, clouds' movement methods can be exploited, and buildings need not be limited to hermetically-sealed pillboxes if you're careful.

Although a cloud will glide uninterrupted along a single Z-level, it will teleport to the top of straight walls and pass over structures. As a result, a cloud will climb any hills and fortresses in its way with ease. Closed doors, raised drawbridges, and walls will keep the billowing parts out of buildings, but the movement of the cloud is mostly dependent on which tiles are marked "outside." Clouds will not propagate inside a roofed area, although already-started miasma-like bursts can billow under the edges of such places if there are no walls to stop them, or if there are open windows in those walls. Clouds can also teleport down from an open roof (it only takes one tile of open stairwell for a small segment of cloud to teleport down and burst upon the bottom floor of your tower.) They will pass through fortifications with ease, although they'll never spawn inside a roofed fortification; a cloud must billow in from somewhere else in that case. For this reason, do not make windows that are one the same z-level as the rooftops of adjacent buildings or natural features. It is safe, for instance, to make a tall, isolated tower and give its middle levels windows with no protection whatsoever, because the clouds teleport rather than climb, and will not teleport to any inside area. They would go directly to the roof without bothering the levels in between. This could be multiplied to make something like New York with complete impunity, so long as all the rooftops are at the same height.

If you choose to fortify outside, either be extremely careful with your designs, or be sure to have any open areas secured with floodgates, doors, or bridges to act as shutters to keep the clouds out. Adding doors throughout the structure to stop any accidentally-contained clouds from moving further inward does not hurt. It is important to emphasize that no rooftop will ever be safe.

It should be noted that attempting to make an open-roof barracks or tavern to prevent cave adaptation is extremely risky, even more so in a mixed-biome embark because the hazards of evil clouds are not immediately obvious. It would seem that the temporary disappearing effect of evil clouds when it attempts to cross a non-evil area is overwritten if it sweeps across constructed or otherwise modified floors (i.e. channeled out, roofed, or walls). This means erratic teleporting of the cloud depending on how much you've constructed but always means that any roofs are not safe. It also means the clouds will "appear" to linger on top of constructed surfaces, even if said surfaces are not in the evil part of the area.

The only part that the cloud will not reach when it interacts with constructed walls is that it cannot touch the natural surface tiles within the walls that are the courtyard if the area is non-evil. Constructed surfaces and possibly channeled out areas are fair game for the cloud to spread. It's unknown if clouds will originate within modified tiles that are within non-evil areas of the map.

For unknown reasons, clouds will not teleport up multi-tile trees, but will pass uninterrupted below their boughs. This will not be true for anything you build, implying that any "outside" tile is dangerous, as trees provide support and elevation without changing which tiles are exposed to the outside.

Undead created by evil weather gain immediate strength bonuses and acquire a status of Opposed to Life. They will tirelessly seek out living things to kill until they are struck down, which can take considerable effort.