Most workshops in Dwarf fortress are represented by 9 squares in a 3 by 3 square pattern. Some are 5 by 5 (Siege workshop), or 1 by 1 (Quern, Screw press, and Millstone). Getting a proper work flow is very important to the success and wealth of your fortress.

Laying out your workshops in the most efficient way possible is quite a science. There are several points that should be considered.

Keeping workshops of a specific industry together is a great way to see if you need more workers creating booze or making leather toys. If you have all of the food related workshops in a single room, you can tell with a glance that your cooks are slacking off.

Just as you want your looms close to your clothier's shops, and you want your tanner's shop next to your butcher's shop, you will want logical stockpiles close to your workshops. It makes sense to put your raw food stockpile right next to the kitchen, so that your cook doesn't spend all of his time walking from one end of the fortress to the other. If the correct stockpile is close at hand, those roasts will be coming out of that kitchen in no time.

When a dwarf claims a workshop for his very own, you have a 50/50 chance of the artifact he's about to make being really awesome. He could make an artifact throne out of three lumps of bituminous coal, and it will be worth a whopping 4800 dwarf bucks. However, if you forbid every stone in your fortress except for the natural platinum, he'll make you something very near a six figure artifact.

There are a few ways to control what he chooses. A start is to have the workshop that he claimed be in a room that is only reachable through a door. As soon as he claims it, lock the door so that he'll just sit there yelling out the things he needs. Now you can go on making only the items available you want him to use (usually the most expensive). You can forbid unwanted items both from the stocks (may require highest precision achieved by your bookkeeper, especially for stones) or after he has collected them (will retask search for that item), dump items inside the workshop or near the door (the latter won't work if he has a preference). If you use mass-forbid take good care to allow everything after the artifact is finished!

Alternative solution is to build Artifact Construction Complex, containing every mood-able workshop and small stockpiles of most precious types of ore, metal bars, gems, etc. When not in use, ACC should be either locked, or everything in it forbidden (including workshops). Forbidding is better, because in this case these workshops won't receive orders from your Manager. You can also deal with it by filling workshop's job queue with 10 suspended jobs. Once the dwarf is struck by the mood, ACC is opened, and all claimable workshops not belonging to ACC is forbidden.

This way the normal operation of the workshops is disrupted only for the time needed for moody dwarf to claim workshop, instead of all artifact construction time in first method. Further more, only one type of workshop is nonoperational, instead of all workshops that use forbidden materials.

When the very worst happens and your triple legendary dwarf fails his strange mood and goes on a rampage destroying the faces of all the pets and dwarfs around him, it's good to be prepared.

The easiest form of protection is a simple door on the room the workshop is in. Lock for the few months it takes for him to die of thirst. You can spend the time waiting for him to die by getting his coffin made and situated.

Putting cage and weapon traps around the common stairs is always a good idea, for both tantrummers and for possible invasions.

Alternatively you can place input above and output below the workshops or the other way round, depending, for example, on the location of your trade depot, or other workshops involved in the chain of production. Additional stairs may be useful.

This design makes it easier to contain berserk dwarves.

(Beware access may be blocked depending on a workshop's pattern of internal impassable tiles. Different workshops have different internal patterns of passable and impassable floor tiles. When building a workshop, Dwarf Fortress indicates which tiles are passable/impassable by pattern of light/dark green X's. The central tile is always passable, so for those using tilesets, similar tiles to the middle tile are passable.)

Access and stockpiles are placed above and below the room. Similar workshops can be grouped together for easier checking on, and doors can be locked should a moody dwarf's wishes be unmet. This concept can be used for your entire fortress:

Below you can see a piece from around the central staircase, to see how the design should start. Notice that it is pretty modular, you can have two workshops pushed together, or you can separate them all, and you have a couple options on how you set up your entrances, connecting two workshops with one door, or leaving them with separate entrances. Up to you. Notice the initial diagonal terminates at a workshop, and starts the grid pattern.

The floors alternate workshop/storage. On workshop floors the diagonals immediate to the main stairway are mined out a couple spaces to make room for the first workshops; around those you can start mining in straight lines and start a grid pattern. For storage floors you can leave a wall of stone around the staircase with only one or two walls mined out for access; then mine out everything around it. On the ground level you start by mining into a cave, clear out space for a trade depot, and mine out one spot where you build a single downward staircase; here the entire fortress starts. It works great and is very efficient, though it takes a while to get setup right.

Designed for use with the decentralized living plan, this plan emphasizes fine-grained planning with many small, specific stockpiles and planned workshop quarters. It therefore requires some micro-management to get going. However, once you have it working, things work extremely smoothly and you should never have a significant delay in production again.

The light gray crosses are optional doors. They can be useful for sealing off a Kitchen or Butcher's Shop to keep miasma from annoying the neighbors. Beyond that, the blue field is the stairwell access (recommend separate up stairs and down stairs for safety reasons), and the gray fields are stockpiles.

4x3 workshops are useful for workshops with strange blocked square formations (the Bowyer's shop is an example). They can also be nice for setting up a tiny 1x2 or 1x3 stockpile for a specific workshop - with bins, this can be a significant reserve of material. Imagine a Clothier or Leatherworker with 3 full bins of cloth or leather right next to them.

The 5x5 workshops are useful for shops, kennels, and siege workshops. You can even put your trade depot in one of them if you've got a mind to. Maintaining proper security can be a nightmare in that situation (remember that trolls and others can break down doors and floodgates), but if you manage to get it done it can be a trader's dream come true. They can also be useful for making a specialty shop with a few stockpiles designed to accomplish only one thing (encrusting statues with gems, for example).

The 3x3 workshops are best organized into wings, where a pair of workshops share a similar function with the pair directly next to them. They share stockpile space better this way. When set up correctly, less than 10 dwarves will regularly use each stockpile room, so traffic is a non-issue. There tends to be a lot of dwarves in the halls, though, because peasant haulers visit the workshops frequently, hence the 3-wide corridors.

Finally, this design offers lots and lots of wall space for smoothing and engraving. Free wealth is good.

In this design, each room functions as workshop, hallway, and stockpile. A workshop is placed near the center of each room, preferably so that only a walkable tile overlaps the (*) pathways. The pathways form a virtual double-wide diagonal hallway, allowing dwarves to move through the fortress easily. The pathways, as well as the remainder of each room, are filled with the appropriate stockpiles. Each room should have at least one set of stairs for easy access to adjacent z-levels.

Each workshop has a short path to several nearby workshops on the same and other z-levels, allowing for a lot of flexibility in which workshops are placed in which rooms. Each room is also lockable if necessary. Optionally, the corner can be replaced with a door to allow faster movement between diagonally adjacent workshops.

Alternatively, you can employ a "work site" methodology where workshops are constructed and destroyed as necessary. For example, if you mine out a huge dining hall and it is completely filled with stone, build a masonry shop in the hall to manufacture tables and chairs. This eliminates the need for a stone hauler because your mason only has to travel a few squares to get raw material. In addition it makes furniture hauling more efficient because the tables and chairs are right next to their eventual location. And of course it clears stone out of your dining hall, eliminating the need for a refuse hauler to dump it all.

In very resource-heavy maps, 10-12 smelters may be necessary to keep up with mining operations. I've had very efficient results with this setup - and it looks good, to boot. The stairways lead down into a high Z-level mining operation (keeps the noise away from the bedrooms, too), with additional bar storage 1-2 levels below. One or more magma forges would be down the hall from the bar stockpiles. 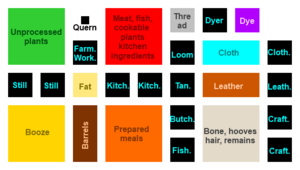 This is a nice, rectangular design which puts the food/drink industry, and the many other industries that feed of its by-products, together in one neat arrangement.

Also, this plan is only meant to expand to the right and bottom-right. So you can safely plug its top and left sides flush with the rest of your fortress without worrying about future expansion. The number of workshops should be sufficient for all but the largest forts.