"Migration" redirects here. This article is about people migrating into your fortress, for the opposite see emigration. 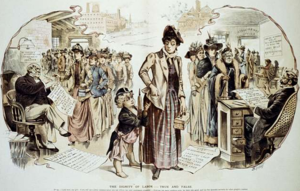 Immigrants from the Colonial Era.

Immigration is the process of people from another site of your home civilization moving into your fortress. As the fortress prospers, migrants will be attracted in larger numbers, these will arrive in groups once per season. In the early seasons after establishing the outpost, a smaller migrant group of 2-10 arrives, followed by a large group in the low double digits in the second spring one year after embark. A notification will be received upon arrival, the migrant group will spawn at the edge of the map and proceed to march into your fortress and to the nearest meeting hall.

Migrants come from all walks of life; from historical figures and skilled craftsdwarves, to unwashed refuges fleeing the horrors of the land. Each group will often include such things as children and domestic animals, including both pets and stray livestock - be prepared with adequate food, drink, and beds, among other things.

The player can also initiate immigration by requesting workers from their holdings, and by accepting petitions for residency from visitors from nearby civilizations. Note that the migrant population must be managed carefully, as if it's too low, there might not be enough people available to maintain the fortress and its defenses, and if it's too high, the fortress may not be able to support your population, leaving them to the mercy of hunger, marauding raiders, and worse. However, migration waves are generally a good thing — if you're prepared for them.

Each migrant can arrive with a wide collection of often unrelated skills, far greater than possible with one of the starting 7 dwarves, and experience levels as high as Legendary. Any and all skills might be represented, including obscure military skills (like blowgunner), high levels of one or more social skills, crutch walker, concentration and others - it's even possible to have dwarves with skills that may not be obtainable in fortress mode, like tracking or pikedwarf. However, Immigrant skills are influenced by your fortress' needs — migrants with skills your fortress uses a lot, or that your fortress doesn't have at all, are more likely to show up at your gates. Important skills (mining, food production, and basic crafting, according to Toady) are weighed more heavily than other skills.Source  · MP3

Migrants may also arrive with equipment matching their skills; for example, a miner migrant may bring a pick with them. Migrants may arrive with all labors except hauling, cleaning, recovering wounded, and caring for wounded disabled, depending on the settings one has entered into d_init.txt.

Some immigrants are historical figures. These immigrants come to your fortress with skills representing their history, or wounds that they have suffered during world generation. They may even be vampires or werebeasts.

In v0.40.05 and above, the d_init.txt POPULATION_CAP setting immediately prevents further immigration once the desired number is achieved, bypassing the two hardcoded migrant waves. There is also a STRICT_POPULATION_CAP setting, which prevents both immigration and babies when reached (although both can be violated by a few special cases, such as the arrival of a monarch). Keep in mind that your population must be at least 80 to get a king and 100 to obtain the current game features.

It is worth noting that you need a certain minimum population size before any of your dwarves will experience strange moods. Additionally, POPULATION_CAP affects only migration,and has no effect on pregnancies - you will need to alter STRICT_POPULATION_CAP, in order to limit births.

To reiterate, the population cap is a (mostly) hard limit on the number of dwarves in your fortress. If you want a fortress with 50 dwarves, simply set the POPULATION_CAP and STRICT_POPULATION_CAP to 50.

The date on which immigrants appear in a season seems to be fixed at the start of that season, but the number of immigrants and their skills are determined when the migrant wave arrives. There is never a migration in the first winter - literally not even a The fortress attracted no migrants this season message.

The two hardcoded waves may not show up for a while if the fort doesn't start on the 15th day of Granite. Note that there may be various reasons for a hardcoded migrant wave to not show up at all, such as if it was blocked by a siege, or if it is not the first fort in the world.[1]

In rare cases, your civilization may undergo a civil war. If this is the case, no immigrants will join your fort after the two hardcoded waves.

The first two migrant waves have a minimum size of 1, if a wave member has a relative in your group already, and a maximum size of 10. The size of these waves are unaffected by fortress wealth, danger, or even the extinction of their home civilization. Note that there may be various reasons for a hardcoded migrant wave to not show up, like if it was blocked by a siege or if it is not the first fort in the world.[1] The third migrant wave and on are influenced by the created wealth of the fortress, with more wealth attracting more immigrants (more research is needed to determine specifics) - specifically, influenced by the fortress wealth as reported by the last outgoing dwarven caravan. Wealth created after the caravan leaves has no influence until the next year's caravan leaves. If the caravan fails to make it out then the fortress' wealth is not reported. If the dwarven liason makes it out, but the caravan doesn't, the liaison does not report on fortress wealth.

Imported wealth, caravan sales figures, absolute caravan profit and caravan profit margin either have no effect on migration numbers, or only have an effect by applying a percent modification to the numbers driven by created wealth. If a fortress manages to trade (not offer) away 100% of its created wealth, then no immigrants will come the next season. More research is needed to determine if the aforementioned statistics have any influence on migration numbers.

One factor which is known to affect migrant wave size is the total size of your fortress's units list (all 4 categories), which consists of dwarves, invaders, merchants, and animals which either died or currently live at your fortress. As this number increases, the maximum size of migrant waves will be reduced: starting at a local population of 1000, migrant wave sizes are limited to 10, and at subsequent levels of 1300, 1600, 1800, 2000, 2200, 2400, 2600, 2800, and 2900, the limit is decreased by 1, and once you reach a local population of 3000 you will cease to get migrants at all.

The DFHack command fix/dead-units can clear uninteresting (unnamed) dead units from the units list and allow migrants to arrive again, if this is what is keeping them away.

The maximum wave size reported to date is 77 archive

A different message for migrant arrivals will be triggered depending on your fortress' dangerousness. That number isn't actually a death count, but some sort of composite "fear" value determined by adding up a bunch of sources and dividing them by various amounts. It is not sure exactly what those sources are, but at least one of them is a death count. 0-9 is normal, 10+ is "danger" or "dangerous", and 50+ is "cursed death trap" or "tomb".

Undesirable migrants can be targeted for "emigration" from their individual preferences screen. To do this: Select the dwarf through the citizen list, view their Preferences, and press e to Expel. You will be prompted to confirm, and they will leave the fortress.

In certain locations in adventure mode, you may come across a Migrating Group - for instance, near any recently abandoned fortress; choosing to travel to the group will allow you to talk to the members of the former fortress as they travel back to dwarven civilization.

Some migrants will be incorrectly listed as babies or children, when they are not in the expected age range for those categories. This will automatically fix itself when they have their next birthday.[Verify]

If your fortress does not have a meeting hall, you might have a situation where a single migrant can't find the fort and just stands at the edge of the map, not moving at all. You may notice that, even if more migrants are part of the wave, they cannot enter the map (and do not show up on the units screen) until this migrant moves out of the square, as all migrants in a single wave must enter the map through this square.

When a migrant wave arrives, players should stop what they are doing and check the migrants' skills to see what they may offer to their fortress.

Here, migrants are sorted into tiers, roughly ordered by usefulness to a mid-to-high-level fort. Do note that even F-tier migrants can be useful if a player decides to make them so, and of course, any migrant can find employment as a hauler or a soldier, or may train useful skills over time.

"Valuable" skills can be sorted into three categories - those that produce better-quality items, those that perform tasks faster or more efficiently, and those that simply cannot be done unskilled, such as medical tasks. Remember that, when the dust clears, the most valuable skill a dwarf can have is the one that your fortress needs the most.

Some skills are central to most fortresses, either by improving the quality of critical items or by providing irreplaceable services. These migrants can improve a fort simply by showing up. Also known as "can I give them a mood, please?".

Put these dwarves to work, they have much to contribute. Also known as "stalwarts of the fort".

These migrants can be useful, but usually only in very specific cases, or for only a few tasks - if your fortress is focusing in that area, they fit in the above category, but if not, then they are just as valuable as peasants (see next category). Also known as "it ain't much, but it's honest work".

Yes, "F" - they're that bad. Also known as either "free military conscripts" or "can I toss them in the volcano now, please?", depending.