Difference between revisions of "DF2014:Ogre"

A giant humanoid monster found stomping about in the evil plains. Their low howls can be heard long before they are seen.

Ogresses (female) aren't always aggressive in evil biomes. In some cases, they have been seen to stand inside of fortresses without aggression or violence. However, dogs have a tendency to attack them first. If you have an ogress visiting your fortress, you may wish to relocate your dogs. (This may be a bug.) 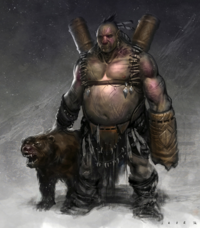 Ogre with a goblin.
Art by Wildweasel339

Ogres do, in fact, have layers, but as of yet, have not been observed travelling with donkeys.