Dwarven civilizations typically form (mostly) peaceful, trade-based relationships with humans and elves, but are bitter enemies with goblins, and consider kobolds a petty annoyance. Dwarven babies become children one year after birth, grow up to become adults at their eighteenth birthday, and live to be around 150-170 years of age.

Well-trained dwarves are a menace in combat; they are the only race that can enter a martial trance when beset by multiple foes, granting them a major combat bonus, and their emphasis on mining and metalworking ensures access to the best arms and armor. They are incapable, however, of riding mounts, and will always fight on foot. Note, however, that this is only applicable to player controlled dwarves in fortress mode, as they have access to mounts if they're the invading force of a siege.

), which are absent by default if the game is played in windowed mode (though technically, the beards only depend on the font set and can be selected for windowed mode as well in init.txt).

Being underground creatures, dwarves are not fond of the sun, and when exposed to it after spending long enough in the dark they will experience negative thoughts and vomiting, which will be worse and last for longer the longer they have spent underground (or would if it weren't currently buggedBug:11901). 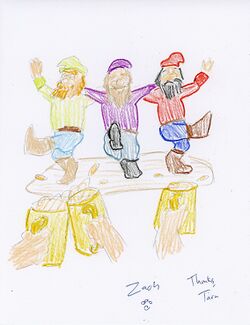 Dwarves also have the reputation of being incredibly irritable, becoming stressed at the slightest provocation. The problem was compounded by dwarven touchiness in previous versions of the game; they easily became depressed, throwing tantrums that spiraled out of control for what seemed like minor reasons (e.g. a temporary lack of unworn socks). This inevitably led to players' emphasis of the "dwarfy": failsafe designs, machinery in place of dwarfpower, fun with magma, seizing control of the environment, killing all the cute fuzzy animals, strip-mining the whole place hollow, etc. It is a great insult to be called an elf, implying that the player is apt to sit around and gaze at trees, living in the world rather than bending it to their will.

This brings us to the question of why dwarves become sad when they see a fellow dwarf killing a creature. In this, most species are only partially correct in the assumption that the dwarf regrets the loss of life. The real reason dwarves become upset, occasionally becoming melancholic and often throwing fits, is due to the regret that they were not the cause of said loss of life. This is especially true when the creature slain belongs to one of the following categories, in ascending order of amount regretted: