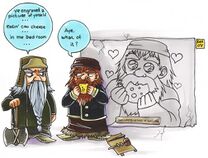 Revenge of the FUN

Revenge of the FUN is a comic series about dwarves striking the earth, and the FUN striking back, in all outrageous fashions.

Lord of the Dwarfs

Dwarven Trail: A Dwarf Fortress Comic was a sprite comic by Matthew (Opirian) Tracy. It used RPG Maker VX for the graphics, which mimicked some of the popular Dwarf Fortress graphic sets. It followed the journey to and establishment of a new fortress. Urist was a recurring character. The comic was hosted on a couple different sites at times, but they seem to no longer be available or safe; the forum post appears to provide all the pages, albeit with hosting watermarks. The Wayback Machine on the Internet Archive seems to only include page 9.