Difference between revisions of "History of Dwarf Fortress"

Dwarf Fortress has a huge planned feature set (see Bay 12 Games for a list), and has evolved considerably since its first public release on August 8, 2006. The following is an overview of major and minor changes made to the game, and when they were made. There are currently many omissions of important changes (for instance, a period during which sieges were broken and finally fixed).

Along with a host of new features, the release of 0.31.01 brought a new version system, shortening the originally 5-part (6-part if the SDL experimental branch is included) version number to just three parts.

Changes in the 3D Version

With the release of the 3D version, a huge number of changes were introduced. The central change was the introduction of a Z dimension to the game map; previously, all fortresses were built on a single, two-dimensional plane -- with the new release, fortresses could span dozens of levels. The layout of terrain on the game map also changed radically, featuring separate distinct stone layers with (mostly) geologically accurate contents, as well as allowing a single fortress to encompass several different biomes.

The following is a list of major aspects of the 2D version that changed completely with the release of the 3D version.

There were not as many kinds of stone. Stone was divided into three categories: Light (Limestone, Marble, Moonstone), Dark (Jet, Obsidian, Onyx), and Gray/rock (all others). Light and dark stone (other than obsidian) had 2x value multiplier, and Obsidian had 3x. You could choose whether to make something of light stone, dark stone, or rock, but you could not specify light or dark but exclude limestone or obsidian.

Ore and gems were logically separate from stone. All types of ore/gems could be found - availability was based on how far into the mountain you were digging. For example, gold, platinum, and hematite were always beyond the chasm, as was coal.

There were not as many metals, and only a few alloys. Each metal type had only one ore - galena was a silver ore; there was no lead. All alloys were smelted from ore, with steel being the sole exception (pig iron was made from iron bars, but steel was made from pig iron and hematite).

Mining yields were all based on skill level (starting at 25% for a Dabbling miner), but only ore could reach a 100% yield - gems and coal maxed out at 63%, while normal stone could only reach 44%. Until version 0.34.07, all mining byproducts followed the "ore" formula; up to 100% of the time, dependent on skill.

There was only one kind of coal: bituminous coal, yielding two bars of coke from smelting. Only Limestone could be used as Flux for making Steel.

Sand was always available, from the banks of the indoor or outdoor river.

The encumbrance system was changed; the Γ unit was made 1/10th its former weight, and much greater variation in material weights was introduced.

There was just an "outside", with a river zig-zagging north to south (except in scorching/freezing climates), a nearly flat cliff face, and cave river, chasm, magma river, demon pit, and adamantine-lined chasm at fairly regular distances in to the mountain, that were present in every fortress. The cave river was lined with limestone; the magma river was lined with obsidian. "Discovered" features (cave river, chasm, etc.) would only be partly revealed according to what was within line-of-sight from all dwarf-accessible tiles.

(Note that the compass directions are an abstraction, and the river does not necessarily actually run north to south with the cliff face to the east)

The chasm would contain primarily antmen, ratmen, or batmen, and 5-15 of them would spontaneously crawl out of it on a fairly regular basis until you poured enough magma in there to "kill" the chasm. While activity zones did not exist yet, you could [o]rder refuse to be dumped into the chasm.

The underground river would flood when breached and then once each spring, summer, and fall (in the form of waves sweeping out up to 20 tiles from its banks), and the floods would tend to sweep dwarves into the river, who would almost always drown. Items swept into the river would permanently disappear. Irrigation was much more necessary for farming than it is now (as you could only build farms on muddied tiles; soil types did not exist), though some fortresses survived purely on tiles muddied by the natural flood ("Nile-style farms").

Both the cave river and magma river had a chance of flooding when first breached; this would often drown the miner (or flat out kill him, in the case of magma).

While natural floods were limited in size and would subside naturally, floods released by floodgates expanded forever and were only ended by an "anti-flood" caused by a floodgate closing or a cave-in. An antiflood would not be generated if the flood waters were connected to a source of water, leading to permanent flood states if one was not careful. One floodgate being destroyed (by a troll or magma man, for instance) or opened would pull fluid from the river into a channel, a second will release it onto the surface. Channels would absorb surface water and not allow floods to pass. Channels could be walked on when not filled with fluid. To carry fluid over rivers or the chasm, you had to use a bridge-like building called an aqueduct.

Wells could just be "dug", and did not have to be connected to a water supply. Cave river creatures (frogmen, snakemen, or lizardmen) would show up spontaneously along the banks of the river (and also crawl out of wells beyond the cave river), though much less often than the chasm creatures.

Aquifers did not exist in the 2D version.

Cave-ins would happen in short order if you mined out a 7x7 area or larger without leaving an unmined natural column in place (or built a support pillar). The cave-in was not immediate, but cave-ins triggered by blowing out a support were immediate. Supports could survive the magma flood. 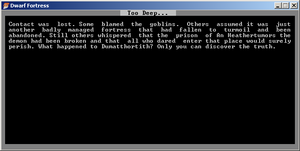 Beyond the eerie glowing pits, forming the far edge of the map, was an adamantine-lined impassable chasm (containing no creatures -- at least, none you ever saw). Mining even a little bit of raw adamantine set into motion an eventual and unavoidable end-of-game, and mining 100 or more units would guarantee the game ended at the start of the next season. You could not reclaim a fortress lost this way. If you visited a "too deep"ed fortress in adventure mode, you would find a large "Demon". After the demon was defeated[1], all raw adamantine, mined or not, would turn into galena. The 3D versions effectively switched this around - rather than having to release demons in order to get to the adamantine, the demons would instead be released (either from the eerie glowing pits or from Hell itself) as a result of mining too much raw adamantine.

In the 2D version, a number of related skills were lumped together via a common labor. The skills of weaponsmithing, armoring, blacksmithing, and metalcrafting all existed separately but were enabled via a single labor called "metalsmithing". Potash making and lye making were grouped under "ashery operating". Gem cutting and gem setting were lumped under "jeweling".

The most recent releases are listed at the top.

In a devlog entry for 2011-01-30, Threetoe announced plans for a series of nine numbered releases ("Short-term Goals" on the dev page) to finish off the long-planned "caravan" development arc. Release 1, improving towns and introducing markets, along with a variety of supernatural creature types, was predicted to have a version number of 0.33 or 0.34 and was released on Valentine's Day 2012 as version 0.34.01.