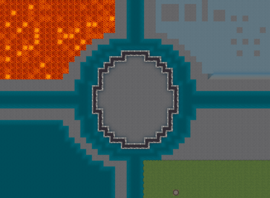 Layout of the classic arena, similar to arena in previous verisons.

The object testing arena is a special game mode accessible through the main menu where the player can alternate between spawning creatures, manipulating objects and features such as the weather and temperature. It is a tremendously useful place, usable for testing modded raws, or determining which skills to train against which enemies... or you can just have some fun carnage by spawning 50 steel-clad dwarves and setting them on some unarmed elves for that combat log goodness. It's possible to save games in it, in order to continue testing from a previous session.

In this version of the game, there are three choices of arenas: small arena, forest and classic arena, with the last choice being the same arena from older versions of Dwarf Fortress. Unlike the older versions of the game, the player can no longer butcher corpses, nor control them as if playing adventure mode, though this is most likely due to the game not yet having adventure mode.

The list of creatures can be seen with the k key - press c to create a creature, select the creature type, skills and equipment, and then press enter. Press Esc (or whatever you bound "leave screen" to) to cancel without creating the creature. You cannot delete creatures, but you can, however, press w then l (in the k menu) to create a stone wall, instantly killing anything on that tile. Creatures with the [ARENA_RESTRICTED] or [DOES_NOT_EXIST] tokens can't be spawned in the object testing arena, unless the aforementioned tags are removed from their raw files. Note that some creatures with no combat capabilities (such as vermin) cannot be spawned, regardless of having the aforementioned tokens or not.

While in the creature placement menu, it is possible to add skills to your creatures, such as the fighter skill, or weapons, ammo, and armor. Creatures unable to use the weapons given to them will drop them upon unpausing, but creatures such as dwarves will happily do so, as long as they at least have dabbling-rank in its associated skill. You can also set exactly how much of a certain item you want when you select it, by using the + or - keys, which is the only way to get a creature to hold more than one piece of ammo, as the arena lacks an option for spawning quivers or backpacks.

A creature can be created with a unique condition from an interaction by pressing u in the creation menu. In vanilla games, the available effects are the interactions of necromancers, animated corpses, disturbed dead, accursed, werebeasts and vampires. Any modded interaction with a defined arena name will also be available.

It is possible to 'Team' creatures up by pressing s and d in the creation menu which is shown on the top left-hand side. There are 9999 teams (instead of 99 as in the previous versions), as well as "Independent", which is the default and acts as every creature for itself.

In this way, you can create simulated battles against beasts or enemies - for example, twenty sword-users versus twenty macemen - and analyze the battle from gamelog.txt. (Necromancers and disturbed dead that are marked as Independent will not be at peace with the zombies that they raise. This is not a bug, because arena independence overrides anything else.)

Morale may also be switched on or off, by clicking the option at the right side of the screen.

Multi-tile trees are also available from the look/create menu, under tree. Using the submenu on the right, you can select the species of tree and set its age. Pressing enter will spawn a tree at the cursor using the current settings. Trees can be placed anywhere, even a rock block floor or in mid-air (the latter will also cause a cave-in, amusingly replacing intermediate rock block floors with sand). Arena-created trees do not spawn with roots, nor is it possible to chop down a tree, though they can be burned by spawning lava, killing the tree.