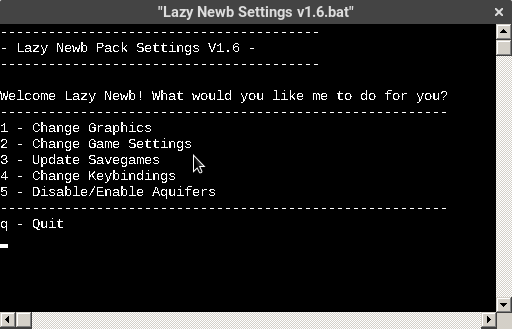 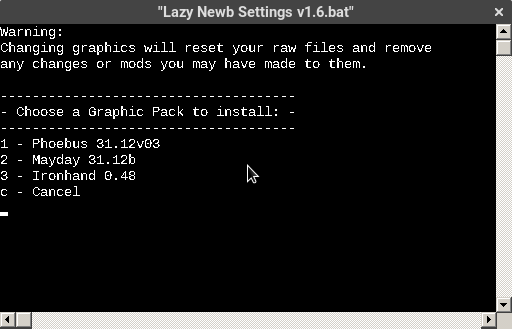 The End of the First Age

In order to elicit help and contributions from the community LucasUP opensourced his graphical interface in February 2013 by releasing the source on github (forum post).

By the late autumn of year 2013 the LNP was out of date with new DF releases, and users were clamoring for an update. LucasUP's life had become too busy to focus on the LNP. On November 16, 2013 LucasUP declared his tenure as overseer over, thanked the community for their support and gave his blessings for the successor packs that had appeared on the scene.

Hello guys. I think I have to apologize for my long absence. :(

Yes it was my intention to let others work on and maybe eventually take over The Lazy Newb pack after I had released it open source. But It was NOT my intention to go dead silent for so long and have it be such a forced/jarring transition. I'm really sorry about that. Of course other life responsibilities took me away from LNP, but I don't really have great excuses for why I didn't at least give you guys any updates on myself or re-direct you to other versions sooner, other than just my mind has been elsewhere.

Sorry for any frustration this has caused you guys, and I hope I haven't caused too much ill-will. I feel like a jerk and like I've just been trying to avoid confronting that. :( I've updated the OP to link to the new Windows/Linux/Mac packages. If there's anything else you guys would like to see from me, I am happy to hear from you. I do read and respond to my PMs too, if you wanted to say/ask me something in private.

I just also wanted to say, on a more positive note, that I am really happy and proud to see how many people have cared enough about LNP to want to continue it and work on it. The fact that there is now working and regularly updated Win/Mac/Linux versions is really fantastic, and its something I would have never achieved myself. So, thanks to the DF community! You guys and girls are awesome.