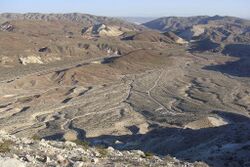 An alluvial layer of land in Canyon State Park.

Several minerals, ores, and gems are specified to occur at least in part within alluvial layers. Alluvial stone is loose and unconsolidated stone that has been eroded away, smoothed down by water flow, and then redeposited in a non-marine setting. The presence of jade is a giveaway that a particular stone layer is alluvial as the gem only appears in such environs, but otherwise identifying an alluvial layer as such is very difficult. Alluvial layers are always located near the surface, usually in sedimentary stone.

Whether or not a particular stone, gem, or ore appears in the alluvial layer is controlled by the [ENVIRONMENT:ALLUVIAL:...] tag in its raw files. Alluvial environments can contain clusters of: