From Dwarf Fortress Wiki
(Redirected from DF2014:Âsax)
Jump to navigation Jump to search

Âsax (Goblin for Masterjails) was without a doubt one of the most badass cave swallow men in the entirety of the underworld. He defeated one forgotten beast and severely wounded two others before flying off to live with the dwarves. He was eventually slain during an ambush by a goblin lasher wielding a silver whip.

The link to the original forum post can be found here. 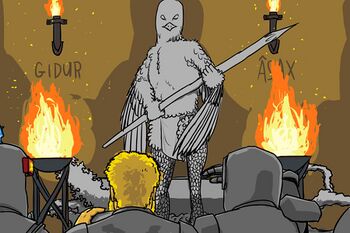 Masterjails was a cave swallow man born in 1042. He was of unknown parentage.

[Yes, Âsax was 11 years old when he killed Rusmo. But then again, cave swallow men come of age at 1 and live until about 30.]

In the early summer of 1054, Moroserivers the Decent Salve received its name in Reignstake from Masterjails.

In the early summer of 1054, The Cyclopean Tar received its name in Reignstake from Masterjails.

In the early spring of 1055, Masterjails bled to death, slain by the goblin Atu Wraithwhipped with a silver whip in Reignstake.

Yeah, that's pretty much his entire life according to legends mode. It misses the months spent fighting undying abominations of ash and coral, though, dodging attack after attack, without suffering anything worse than a broken toe, but there isn't much to say about him. He only had thirteen years of life, though with them, he achieved more than the average elf does in a thousand.

The sheer ordinariness of him makes him all the more awesome. He wasn't chosen by some mighty god, or born to some ancient lineage. He did not wield mighty artifacts or arcane magics. He was a cave swallow man with a fungiwood spear and a tunnel tube shield, who dared to challenge the unspeakable... and won.