From Dwarf Fortress Wiki
(Redirected from User:Bartavelle/DwarfCompanion)
Jump to navigation Jump to search 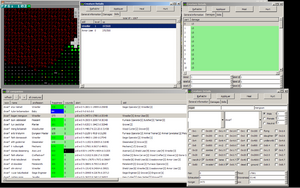 This is a preliminary screenshot of the prototype.

This project is about having a helper utility for dwarf fortress, hopefully filling gaps in the user interface. It will also allow some cool cheating, so that it would be possible to play with the engine. For example, you can now mark your nobles as butcherable! Ain't that cool?

For now, a PROTOTYPE utility is available, for testings. It uses python and requires many dependencies. It will end up as a standard .exe tool once features are ironed out.

It supports version 40d16, supposedly. The latest screenshot is at this place.

When fiddling with DF memory, you might get crashes. Here are two important advices:

There is an executable version by Valdemar available that does not require Python or any of the other of the dependencies to be installed. Unzip it and run "dfcompanion_prototype.exe" to bring up the core companion window. The scripts available in the pure python version also have exe equivalents:

How to install and run it[edit]

You need to install several things first. Do it right, or it will not work.

You should run it from the command line. Start / run / cmd.exe. Then type

You can copy by clicking on the top-right icon, and click copy in the Edit submenu. Then select with mouse, and press enter to copy.

You didn't install properly the 3 modules at the pygtk site (see link in the how section).

The GTK runtime environment is not properly installed.

There is a DLL conflict. You should reinstall the GTK runtime environment. If this fails, you have to find the old DLL that is staying somewhere on your system and remove it. Probably in c:\windows\system32\

Have everyone look at the discussion page on the off chance that they might know something.

Usage - what can you do?[edit]

The general idea is to have the main window open next to your DF windows. It should help you play the game by providing useful hints while playing. Order dwarves using the column "alerts" so that most important stuff is on top : hungry, unhappy, moody, hurt dwarves. You can play with creatures and view detailed views of their attributes by double clicking them. Right now, you can interact by:

Interesting effects are butcherable dwarves and Corbine's crazy dogs. Oh, and skeletal legendary miners that turn against your fortress.

Here is a collection of scripts that wouldn't fit in DC but might be useful. Copy them in the DC folder and run them.