This log entry is from the bloodline game Tinbolt.

As the steward of this Tinbolt for the next year, I shall catalogue our progress. There is much to do, so I will start straight away.

There are two dwarves and two children stranded on the far side of the chasm, cowering in the shadow of the goblin stronghold. I ask the mason why he hasn't built them a bridge for safe passage, and he drones on about reaching the far side to place initial supports. A good throttling later he felt inspired and hurried off to contruct a walkway supported entire from the near side of the chasm. Additionally, I have designated a safer drinking location to draw water which the stranded dwarves can access, and forbidden all alcohol inside our fort for a short time. This should allow our bleleagured brethren some respite while we get the bridge together.

Led Kelatul is demanding some quantity of shells for his work. The sheriff has warned me of his instability, and I question the lack of enclosure and lockable doors on this dwarf's workshop. Nonetheless, I proclaim all foods forbidden until the turtles are eaten to provide shells for this potential madman. 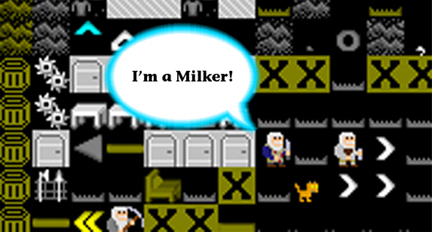 There are far too many dwarves standing around with nothing to do while others seem to be overtaxed. I have decided to conduct interviews with every dwarf in my charge, assess their skills and assignments, and then give them new tasks and corresponding job titles. Efficiency improves immediately.

NOTE: All job titles that have been manually diddled have been designated with a tilda ~ after the title. 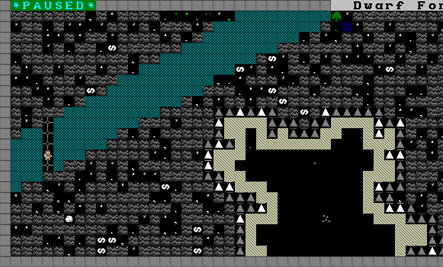 There is a collective cheer as some of our stranded immigrants cross the footbridge to relative safety. Unfortunately, one of the dwarves is too wounded to come across, hopefully help will reach him soon. Even more unfortunately, one of the children is too stupid to come home. Hopefully that will change when she gets hungry. The bridge will serve future immigrants as well, but we must keep an eye out lest the goblins use it to their advantage.

Elves have arrived to trade. I hope they have liquor.

We've traded the elves a load of stone trinkets for many bolts of cloth. I'm unsure as to why they're still hanging around, but we're basically ignoring them.

After much deliberation, I have been selected as the new expedition leader! Tinbolt shall thrive under my guidance. 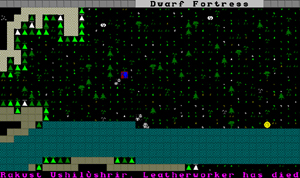 Rakust Ushilushrir, the stranded leatherworker with the broken leg, has died from thirst. A keg has been tapped in his honor, but his body is not safely recoverable. The goblins will pay for this.

Immigrants have arrived, more than we have beds ready for despite my recent preparations for just such an influx. They are all reassigned to necessary tasks despite the useless slop they show up claiming to bring to Tinbolt's benefit, but I am pleased to see a Marksdwarf and Axedwarf arrive in the mix. The fort structure we have now is bursting at the seams, it's high time to implement some long term planning and excavation to support future growth.

As Melbilazmol has grown to become a Peasant. Stay in school, kids.

Led Kelatul has given up holding out for his shells and is stricken with melancholy. He has given himself a poor haircut and is moping around wearing all black.

Erith Erithegen, the Cook, has become posessed and taken over a craftsdwarf's workshop. He starts working on his project quickly, hopefully it will be worth a damn. 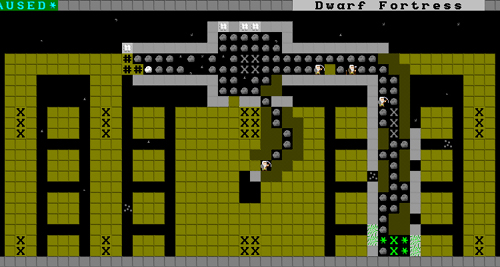 Preliminary excavation for the longer term development has begun and is progressing well. At this point the current plan is to convert the bulk of the current work area to farm & food storage and move all other workshops deeper underground.

At last, Erith's masterpiece is complete - a rock salt mug. Finely crafted, but the salt makes beer taste like piss.

A human caravan has arrived! Even better news, our broker Urvad seems to have put an abacus together which has made trading much easier. We were able to clean out their wagons of everything useful to us without dipping into our valuable Quarry Bush Roasts, which is a good sign.

Led Kelatul, the despondant bone crafter, has died from dehydration in the statue garden. As we do not yet have a proper graveyard, I designate the old Point Blank archery range as the burial grounds, and order excavation for a larger target practice facility. 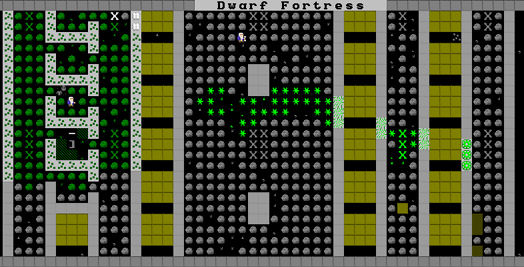 Excavation of the new production area is complete, with exception to individual workshop cubby's which are not carved out until the shop is ready to be built. I'm moving our stonecrafters down there first to get cracking on eating up the stone in the area.

A dwarven caravan and liason has appeared on the horizon, hopefully they can make it through the goblin fort area.

Rith Ilrallikot, the Axedwarf, has starved to death. I don't know why, I have the feeling he was too stupid to live. 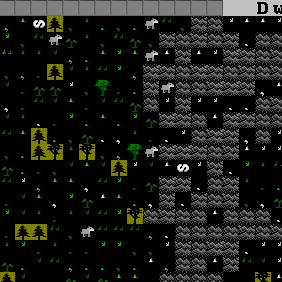 A pack of wolves threatens our wood cutters in the south western forest. A troupe of marksmen are dispatched to deal with them, but the wolves are driven off by their approach before any shots are fired.

A lone goblin chasing a groundhog has stumbled into the woodcutter's forest, and the marksmen are again dispatched.

The groundhog takes a blow to the leg! Suspense! His prey killed, the goblin retreats towards his territory, only to find himself cut off by our crossbowmen who make short work of him. 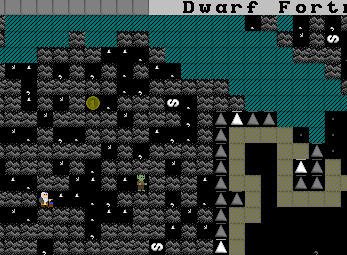 He was not working alone! A cohort of the fallen goblin has been spotted chasing one of our laborers. Luckily the marksmen are nearby and sent in immediately to intercept. 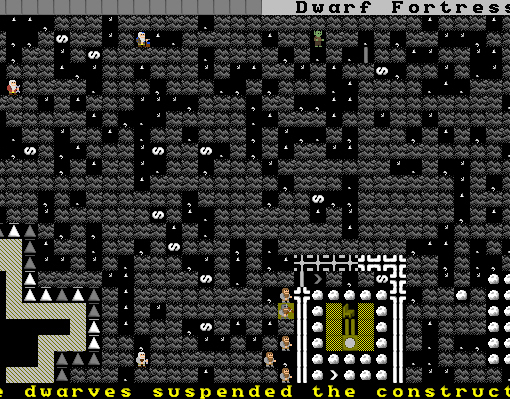 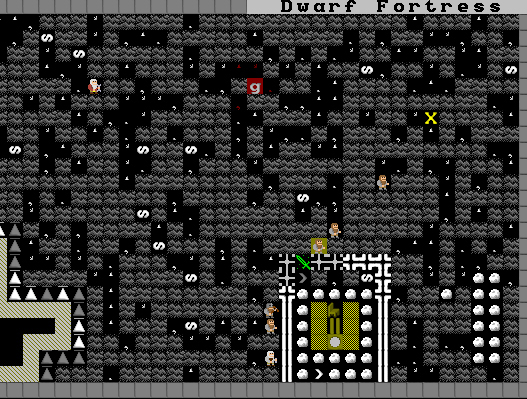 He is dispatched quickly, which is good. He had stumbled upon the final phases of construction for Operation Naked Mole Dog, and his escape could have meant doom for the project.

As the year is growing late I will explain this trap for the steward who follows me, as I do not foresee our crossbowmen being trained enough to handle the task before the winter is out.

Operation Naked Mole Dog (hereafter O.N.M.D.) is the first step for Tinbolt to assert our domination over the goblins of Scabrous Teeth. 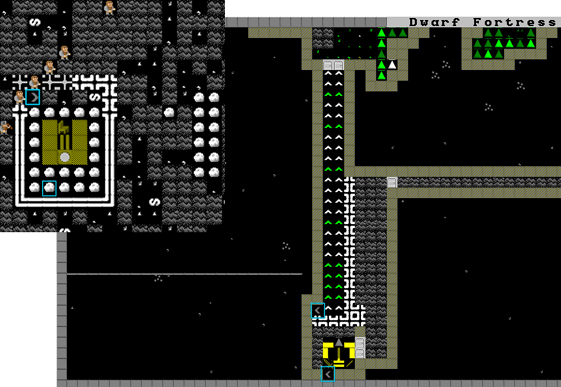 O.N.M.D. consists of using siege equipment to fire on the goblin stronghold across the chasm and bait them into a narrow hall that is the only access route for them to reach the catapults. The hall is filled with traps, has a ballista at the far end poised to sweep the hall, and utilizes fortifications from behind which our squad of crossbowmen can fire on the invaders. There is an escape tunnel that the siege operators and crossbowmen can use if pressed, and this entire system is isolated from the rest of our fortress, so our safety is insulated. There are two basic complications. Firstly, our marksdwarves do not seem to want to practice firing at the range, this may be due to a lack of practice bolts, I am unsure. I would like them to be a little more proficient before goading the goblins to war. I have just recently ordered the craftdwarves workshops off limits to everyone but one each of our craftsmen, so the bone crafter will not be able to dodge the bolt crafting task. This may remedy the situation.

Secondly, we may need to build a tower high enough to reach the top level of the goblin fort and build a catapult there, as our ground level catapult may not attract any interest. This is not a major issue but will take some time and dwarfpower.

I hope the next steward can complete and utilize this project if I cannot.

Momuz Nabaslnul, the Engraver, has been struck by a fey mood! He must be watched, but we hope for the best.

There's something to be said for working drunk. Stukos Glazesearch, the craftsdwarf in charge of making the aforementioned bone bolts, has decided to pick up some bones from the goblin fort across the chasm for this purpose. He was assaulted by a lone guard, but he beat the vermin handily with his bare hands! After stunning his foe with a quick kick to the goblin-junk, he bolted for home.

I had to explain to him that this is not dwarfhome, you cannot just go to the neighbors and borrow a fucking cup of sugar... but I can't stay mad at him. He has become a celebrity of sorts, the engravers are detailing his small room and everyone has taken to calling him CockPuncher.

Momuz has holed himself up with both stacks of shells that the enire fort posesses, and is demanding nothing else but more shells. Sadly, I order doors built on both entries to his workshop and prepare to lock them if time runs short. The rest of the fort seems to be more interested in eating dwarven cheese roasts than turtle meat to save a friend... hmm actually a cheese roast sounds pretty good, I'll be back later.

Winter has arrived and the fort is well supplied. I am preparing some rooms for the immigrants that will likely arrive with spring, and also looking for an ideal area to prepare some proper noble's quarters.

A goblin siege force has appeared behind the existing goblin stronghold. They don't seem to be advancing on our position, but I worry that immigrants and traders will have even more difficulty reaching us. I've ordered the hunter to stop hunting, as counseling against his dangerous penchant for traipsing through goblin territory has gone unheeded.

Momuz has descended into madness. With heavy hearts, we lock the doors to his shop and leave him to his gibbering lunacy.

A gremlin is chasing miners through the base! They broke out onto a ledge on the chasm to reach some bones and were attacked. After a short while, a guard got hold the gremlin and tore him apart quickly.

The miners have been assigned to assist the engravers, at least temporarily. I do not intend to begin any new excavations as the year draws to a close. I have also designated much of the stone in the basement to be dumped into the area between the mason and the craftsdwarves to clear it out faster. The next set of immigrants will have at least 4 good candidates to be full time haulers, hopefully. My successor should remember to let everyone know they can Claim the dumped stones for use in construction and crafts.

My tenure as steward has expired. The year was mostly uneventful, all things considered, which allowed us to lay good groundwork in the areas of production, military, and supply stocks. Tinbolt is now 51 dwarves strong, and the crossbowmen are nearly ready for O.N.M.D. We're short some Haulers, and some additional labor in the farming department would be beneficial in allowing the tasked dwarves to specialize on important side tasks such as brewing, threshing, and cooking. In general I feel the fort is in good shape and poised to strike a hard blow to the goblin stronghold. That said, I pass this diary to the next in line.