If you dig deep enough, and in the right place, you might find a demonic fortress (also known as a curious underground structure) made entirely of smooth slade. You will get a boxed message telling you of this. A demonic fortress is found once per region tile (thus, it is located in precisely one spot in a 16x16 embark square). Demons and other foul beasties might be located at the bottom of the fortress; higher up may be hordes of random undead creatures. The bottom of each fortress is connected to Hell through slade walls, so demons spawning there can not immediately cross into the fortress and swarm you. Hell is only deemed reached once the upright weapon is removed (see below).

If your site does not have a demonic fortress, you will need to breach Hell through a tubular adamantine vein. As there is plenty of space inside a demonic fortress to set up traps and defense, they seem to be the easiest way to 'safely' enter Hell. It is also quite possible to reach the bottom layer of the fortress through controlled cave-ins without ever having to fight a single enemy.

It is easy to locate a fortress (or see if your site has one) in the Building list as an upright masterpiece adamantine weapon. Zooming to this will tell you the approximate location of the fortress. It is also possible to create a lever, and proceed to order a connection to (S)pears/spikes. The name "Upright (adamantine long sword)" will be one of the options if there is one on the map.

Since it is not possible to dig through slade, the only way into the structure is from the very top - a large hole will be present at the highest level, not necessarily connected to any nearby caverns. 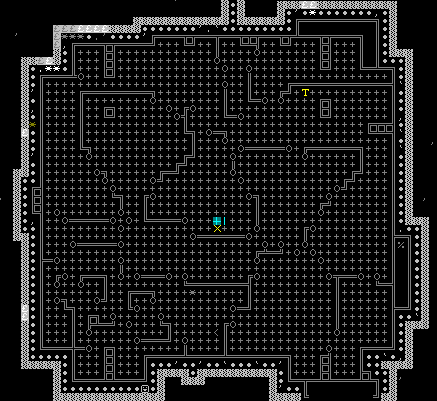 In the center of the lowest smoothed level (pictured) will be a glowing floor and a relatively uninteresting upright masterwork adamantine weapon. However, removing the weapon (by deconstructing it like a building, also known as a bad idea Fun idea) causes the glowing floor to disappear, revealing a staircase and releasing the demons from the lower part of the fortress. This can be easily averted by building a regular floor over the glowing one. Below this level are chambers containing demons. Above this level are many similar levels, but without the glowing floor and adamantine weapon. Some of these levels may take the form of long, twisting corridors, and some may have patches of mud. These levels contain many undead enemies, similar in strength to thralls produced by evil weather.

An example of a demonic fortress can be viewed here. And in Ironhand graphics here

It's also possible to remove the adamantine weapon in adventure mode.

Contrary to popular belief, removing the sword from the floor will not make your dwarf the rightful monarch of your civilization.