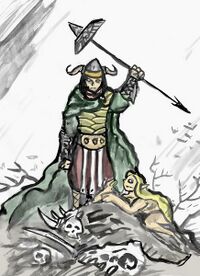 "The Glorious Elf King" by Fault

In one particular slice of the Dwarf Fortress multiverse (generated by Holy Mittens), Cacame ascended to the rank of Elf King of the Dwarves. The story of his rise to glory has been chronicled in an epic 70+ page thread on the Bay 12 Games forum that includes original artwork, economic discussions, raw edits, world gen randomness, Chuck Norris jokes, Battletech references, and a Cacame-themed megaproject. 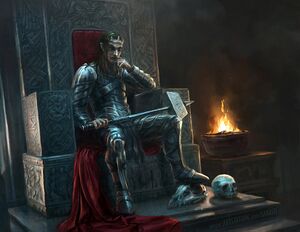 Cacame Awemedinade was born in 83 from Fewetha Spokenthundered (a warrior with five kills) and Osime (an adventurer), both of whom were eventually killed and eaten by Gibberlings (modded grotesque creatures that exist to kill, eat, and reproduce) on separate occasions; his maternal great-grandfather had been a King of the Field of Kindling, notorious for killing a megabeast and fighting another one. This both makes him of Royal Blood even before ascending to the position of King of the Dwarves, and determines his ancestry as worthy warriors.

As for the rest of Cacame's family, they are all living unimportant lives. Most tragically, they are still living in the elf civilization.

Early life and rise to Sovereignty[edit] 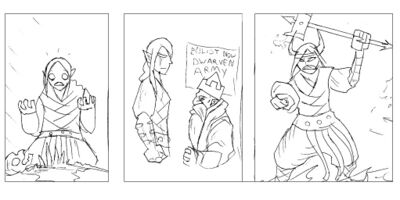 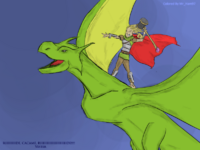 The Creation of Ferns dwarven civilization and Cacame's former Field of Kindling elven civilization were at war for many years, with the dwarves systematically defeating the elves for decades. In 90, the dwarves conquered his home city of Oily Typhoon and placed a new dwarven governor in charge. Cacame was 7 at the time, and 5 years later, at the ripe old age of 12, he became a Guard. Two years later, an elven attack from the Field of Kindling's city of Fish of Magic injured him in the lower body and killed his wife Nemo Ruyavaiyici (who was then eaten by Amoya Themarifa, the elf who killed her). Maddened with grief, Cacame set off to the nearest front as soon as he healed enough to fight.

During his first combat he took up his fallen commander's legendary warhammer[name?] and slew many elves with it, being noted as the battle's fiercest and deadliest warrior; for his deeds, the dwarves' second-in-command acknowledged that Cacame would best put the warhammer to use and should keep it.

Two years after that, in 99, the Battle of Both Kings was fought. In this battle Cacame struck down King Nithe of Field of Kindling (who was finished off by another dwarf called Sibrek Handpages, though); however the other king slain was the dwarven king himself. The dwarves decided that Cacame, by now dubbed "The Immortal Onslaught", should take over as their king.

Once made King, Cacame left in a brief quest to resurrect his wife. He returned riding a zombie wyvern, but without achieving his goal. In 111, at the age of 28, he moved his capital to the Gamildodók (Trustclasps) Fortress.

Colossus of Cacame
(by Holy Mittens)

Due to a courtier's inadvertent slight to his zombie wyvern, King Cacame would go on to defeat a red dragon called Sokröx Glimmerfair (the Duty of Coloring) with nothing more than Competent Hammer skill. This deed inspired the admiring dwarves to build a monument to their king, the Colossus of Cacame. It is told by the bards that there was a large goblin attack during the inauguration party, and that King Cacame himself stood alone before the Colossus and glared at the goblins until they panicked and routed. Some naysayers[Who?], however, claim that a battle was actually fought and won before King Cacame's arrival.

His cape is made of solid gold. It took 949 bars of gold to forge. The vast majority of that gold was home-smelted. The head of his hammer is made of mithril with an iron band around it, spike at the top, and handle. That's 132 bars of mithril and 37 bars of iron.

His armor and helmet are made of obsidian. I'm not even going to attempt to calculate or count how many stones it took. It was a lot of them. The horns on his helmet are cinnabar. His flesh is forged of platinum. 33 bars in total. His eyes are clear glass blocks. Behind his eyes are pools of magma that were pumped from the pipe a fair distance away. Sadly, Visual Fortress doesn't display this as two huge glowing orbs of elf-hating malice. The construction took the lives of five workers, who were properly honored and entombed. 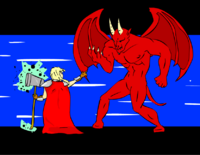 In time, King Cacame's Royal Guard expanded to other races, coming to include like-minded elves and even a couple of awe-thralled goblins, all fanatically loyal and immensely skilled.

Hearing of King Cacame's might and the splendor of his kingdom, the Elven King Iwo Lolamaficemi (Barricaded Sever of Flaying), who fought against and ate Amoya Themarifa, found that it would be advantageous to make a State Visit to Gamildodók. This (predictably) turned out to be a mistake, and he left in a hurry with his entourage after a very brief private meeting. While the precise words exchanged are unknown, it isn't hard to guess what happened.

The elven king's visit had, however, the effect of stirring the desire to take direct revenge on his wife's killer, and drove Cacame to leave the fortress incognito. While the king returned more bitter than ever (if that's even possible) and never spoke about what happened, some inquisitive bards managed to find clues to his doings elsewhere. 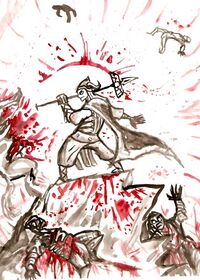 Having his deepest desires denied, Cacame started to fall into a apathy-driven lassitude. However, when the humans decided to besiege his fortress he recovered some of his spirit, lowered the drawbridge and waited them out alone between the legs of his Colossus to greet and entertain them.

On this occasion, he taught them to play hammer tag, dodgearrow, head cricket, foegolf, and other contact sports; he also showed them a few parlor tricks such as "punt away the horse from under its rider". To his great chagrin, the surviving humans quickly decided the party was running late and retired...

After that, he started leaving in short stress relieving incognito trips, and appeared to have regained his old fire. 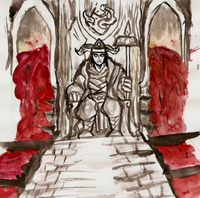 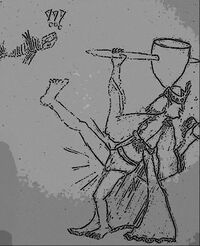 Add him to your game![edit]

Shima: Add this to descriptor_shape_standard.txt in the raws, and he will show up in other worlds. He might also appear in the likes of Dwarves, possibly ... will appear in engravings and decorations for all races, that much I can tell you for sure. There may be some odd syntax "Engraving of a ale-chugging Elf King etcetc" and such, but that's the nature. Rarely, in a Dwarf's likes, it might show "Elf King Cacame Lastnamey" as a like as well.

Shima: I bring you... Awemedinite!

And this goes into raw\objects\reaction_smelter.txt:

And this goes into raw\objects\reaction_standard.txt: