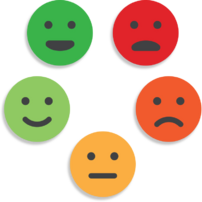 Certain circumstances can evoke a wide range of emotions, both negative and positive, affecting dwarves' stress levels. Emotional reactions can result from immediate experience, or from revisiting a long-term memory, and are affected by dwarves' personalities and values, resulting in different reactions to the same circumstances. Recent emotions experienced by dwarves(listed along with their circumstance pairs) are listed in the Thoughts and Preferences screen.

Different thoughts can have different "strength", denoting the effect the emotion has on a dwarf's stress levels (negative numbers reduce stress, while positive numbers increase it) and depends on time elapsed and dwarven personality. This thought strength is then divided by the 'Divider' numbers given in the table.

Note that positive thoughts have a negative number, as they reduce stress. Numbers closer to 1 or -1 have the strongest effect on stress.

Many examples of a dwarf feeling emotions are as follows:
He was frustrated after being kept from alcohol for too long.
She was resentful after getting into an argument.
She was blissful after sleeping in a good bedroom.
He was satisfied near a fine Bed.
He felt fondness talking with an acquaintance.
Within the last season, he was angry dwelling upon getting into an argument.

A total of 180 emotions are defined within the code, but only 130 of them are currently implemented: