The central feature of the 'villains release', intrigue is a collection of mechanics and tools that enable historical figures to enact villainous schemes, ensuring a constant stream of Fun for players. As of .47 interaction with this feature is still somewhat unfinished with the January 2020 devlog indicating missing elements.

You can export a villainous network from the historical figures list in legends mode, as shown in the image below:

Villains will visit your fort and corrupt your dwarves. You can use the fortress justice system to interrogate and convict them.

(0.47.03) Necromancers and their assorted villains (lieutenants and experiments) will casually visit your fortress. Interrogating these visitors will always yield plots of espionage and theft, thus it is recommended to jail and kill them on sight to prevent suddenly missing artifacts. 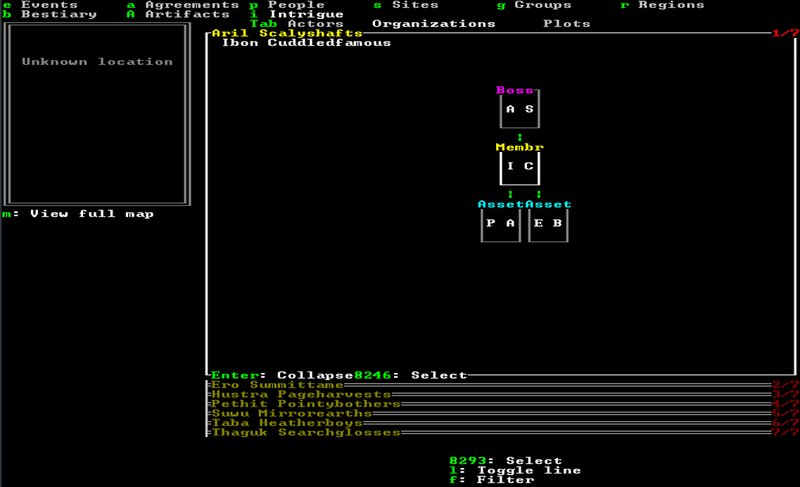 Image showing a villainous network in adventure mode. This network consists of the master, a member (who is the master's childhood friend, incidentally), and two assets, which are position-holders corrupted into providing funds to the network.

Intrigue in adventurer mode is mostly interacted with through the investigation and interrogation menus. There are two major tactics of investigation: Persuasion and Intimidation. Adventurers who wish to investigate benefit from the judge of intent skill as well. Currently, only asking for schemes will result in proper information appearing in the quest log.

Persuasion mainly uses the persuade skill. Complementary to that are the flatterer (for flattering), comedian (for making jokes) and pacifier (for calming down) skills. You will want to make jokes and flatter an NPC to get them into a positive mood. Use pacifier skill to reduce impatience down to patient. After this, investigate using the persuasion tactic.

Intimidation mainly uses the intimidate skill. To make intimidation more effective, you can fight with nearby NPCs, or the particular NPC in question. To avoid killing the NPC, make sure that you stay within the brawl escalation level. The NPC will rapidly become afraid of you. After this, investigate using the intimidation tactic.