This is a short (1 year) challenge that requires some insane micromanagement to score well, not to mention a little bit of luck. As such, there will be a couple of in-progress shots, but mostly it'll be the end scoring shots. 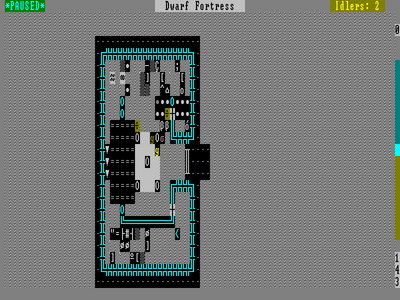 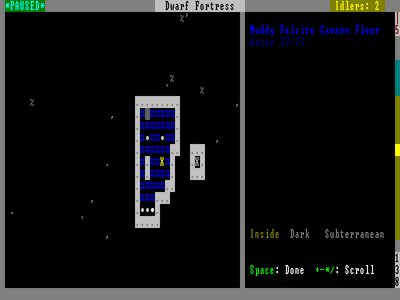 By summer i had walls, a moat, and water. Not bad. 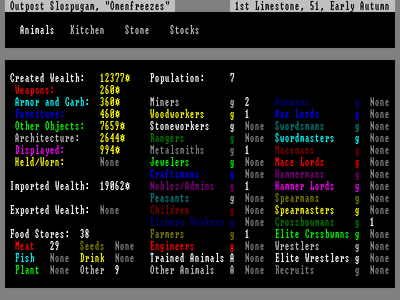 Half-way fortress stats. Yes, it looks pathetic because i basically have no time to do anything to really increase fortress value. 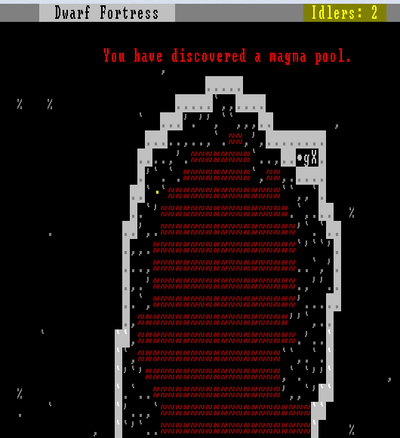 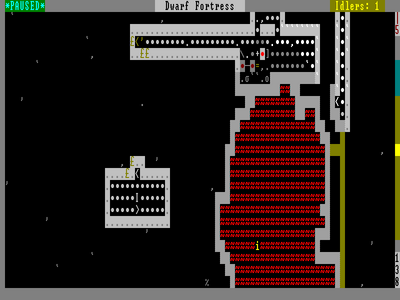 Which leads to a forge, and a super-secret project. Shh! Its a secret to everyone! 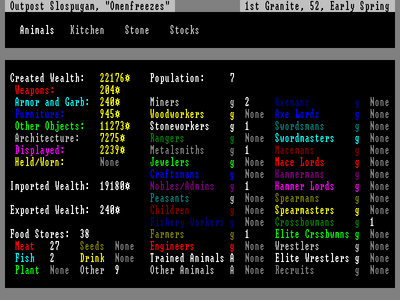 My fortress doesn't look like much on paper, but you'll notice all 7 goblins are still there.

I'm going to wait for the contest to near its end before i post any proof images, but i'll be claiming at least 20 points. (+ whatever i get from his 'present' - which i'm unsure what he means by that.) 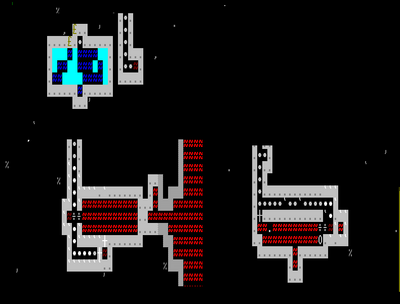 The door is lever controlled. I later realized (in another game) that all i had to do was keep the magma 'moving' to keep the water melted, so i don't even need to remove the door, just pump magma whenever i need water.

There's a bottom chamber below this that is an 'air'lock between this system and the magma pool. The bottom chamber is the resevoir (unfilled while the top layer is full) that the top layer pumps magma out of, and can drain magma back into. I'm not totally convinced they're the same size, but i can channel more area behind the pump if i needed to fully drain the top (I don't though, so that's fine).

This is right after the season change, when the smattering of frozen tiles you can see froze. Note that not all of them froze, so there is still open-air water. The pool remained unfrozen all winter, only partially freezing on the first of spring, so that's a full season of the full pool being open air, and some of it still open-air afterwards - seems reasonable i could channel the occasional ice tile at season breaks if it stays unfrozen otherwise.

3Dwarf image. All my constructions are ice. Visual Fortress just barfed polygons over the screen, so i couldn't take an image with that.

Gift:
Is still as i showed it in the previous screen (wall built to block exit). In addition, here's my forging area: 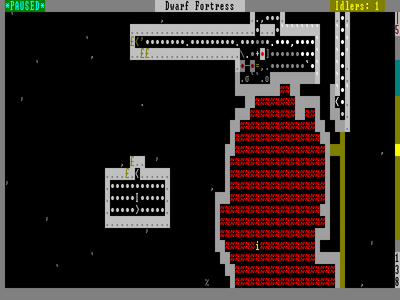 This is an in-progress shot, but notably you'll see there's no open magma in my forging area. The magma chambers also have a fortification stopping entrance of creatures into the magma pools, and regardless, its 3 levels deep, and the bottom level is only getting magma pumped out of it occasionally (to replenish any evaporation in the top two layers), so there's no current through that fortification at present.