Tweak is obsolete, and its functions are now provided through DFHack. 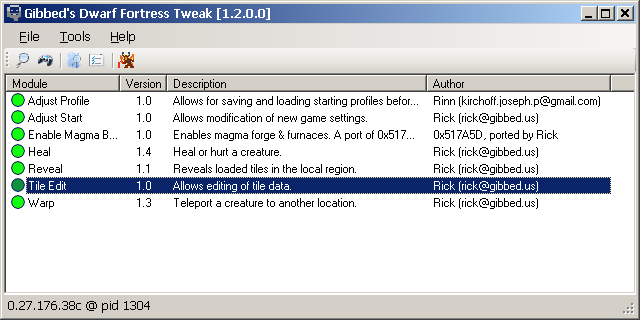 There are many modules - both written by myself and others.

Tweak does not have an installer, but it does have several directories and many files within them, so it is suggested not to directly extract to your Dwarf Fortress directory, if it must, I would suggest putting it in a subdirectory named 'tweak' or equivilent.

The ZIP file for Tweak comes with everything in the tweak directory to make this easier.

Updating Tweak for a new version of Dwarf Fortress[edit]

To update Gibbed's Utilities for a new version of DF:

Todo: But pretty much you just drop the files from the plugin into directory Tweak is installed to.

Looking for more modules? You can likely find more in the Tweak Modules category.

The current version of Tweak is 1.2.0.1. See the changelog for detailed information on changes since last version.

Found a bug? Have a suggestion?[edit]

Report it on the talk page!