Reports are messages detailing combat (both practiced and real) between creatures. The list goes on for quite a while (up to 11 pages, in fact), but only relatively recent combat will have detailed reports (accessible with Enter) attached, out to a year. Combat reports are the best renderings of battles, giving detailed information not bellied by simple characters standing next to or near one another. Since combat involves two (or more) parties, every battle will give at least two reports, one from either side of the fight. Each combat report is record of the cumulative actions of the creature in question; goblins that get wounded, run away, then get struck down will not generate more than one report, for instance. Do not confuse with announcements, which pertain to non-combat events.

The contents of reports are basically textual battle records, and detailed ones at that — every battle event is recorded in the report. Here is an example of a report: 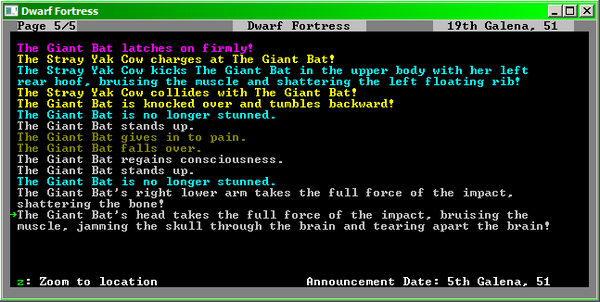