This page is about the mountain feature. You may be looking for the pit/pond designation for activity zones, or for bottomless pits, a form of chasm - or if you searched for Hidden Fun Stuff, you may have been looking for easter eggs.

A glowing pit is a small impassable chasm found in the center of adamantine deposits deep in the earth. There is at most one glowing pit per Local Embark map tile (that is, any game map, even 16x16, cannot have more than one), appearing only within Mountain biomes, and can be located by searching for 'other features' in the site finder. They are surrounded by mysterious rooms, and are dangerous enough to lead to the destruction of even a well-prepared fortress.

If you dig deep enough in the right place, perhaps following that vein of glorious adamantine, you might break into a peculiar chamber with strange glowing pits at the bottom. The veins of adamantine radiate straight outward from the pit, and can be used to triangulate its position - it is much safer to have a disposable miner trapped in a walled space look for it on purpose than to risk running into it by accident. 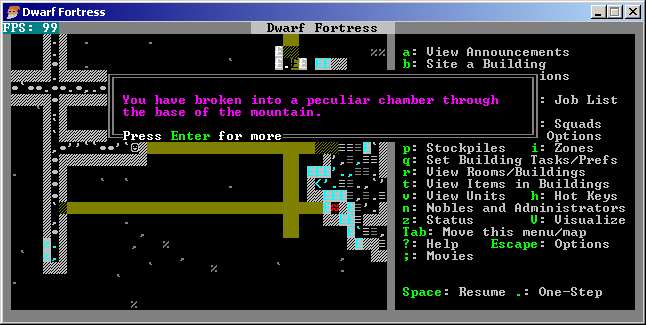 Because pre-existing architecture shows up as an asset of your outpost, you can check the z status screen as soon as you strike the earth; demon pits will typically show up as 4000☼ of total wealth.

In the bottom chamber, there will be chained and caged humanoids, corpses and body parts, upright spears and pikes, bones and skulls, pools of blood, and horrifying masterwork engravings of death and suffering. These are a warning. If you do not take drastic measures such as immediately rewalling the chamber to seal it, the glowing pits will unleash a horde of demons upon your fortress. The bottom chamber itself is home to a single Demon leader, though he is not alone.

Above this chamber will be 2-3 additional rooms, varying depending on what type of demons happen to inhabit it. Muddy chambers filled with vermin and surrounded by pools of water are inhabited by frog demons, while filthy chambers decorated with depraved engravings and filled with additional humanoids are the lairs of tentacle demons. Those unlucky enough to discover plain chambers filled with charcoal and ashes and surrounded by pools of magma will soon be confronted by the dreaded spirits of fire. Each upper chamber is home to 10 demon minions, and all upper chambers will be of the same type.

The lower pits contain a very small amount of magma, usually only enough for a handful of smelters or forges, but sometimes enough small deposits for a good-sized industry. Remember that a level of only 4/7 (but no less) is needed for operation, and ordinary arithmetic works when it spreads into newly channeled spaces, preferably on diagonals from the original deposit.

Of course, you'll have to deal with the inhabitants first...

The squares actually labeled "glowing pit" work like a chasm for draining water and magma, and can be floored and provided with a lever-controlled hatch to the underworld if you please. The "glowing pit" designation and # symbol radiate upward from the bottommost level of the mine - if a hatch is placed on a square there, the open squares on levels above it will become "open space" whenever it is closed. Caged dwarves dumped into the glowing pit generate a "--- died in a cage" message, and caged goblins pass without comment. So far no demons have risen up to encourage further sacrifices or escorting flying trade caravans, but hope springs eternal (except for the dumped creatures, that is).

There can be a few levels of "glowing pit" which are only open space without rooms, engravings, occupants, or any adamantine on the levels below the lowest chamber with engravings and cages. This means that miners on the lowest two levels (at least) can break directly into the pit without having the faintest idea that adamantine is present beforehand. 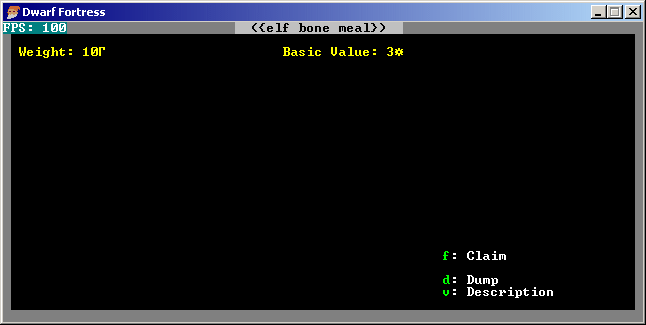