Previous discussion moved from stub-articles along with content now in this article:[edit]

Re-read the article. Darts cannot be manufactured in Fortress Mode. Might be able to find some on attackers if they're wielding blowguns and you wax 'em before they can use up their ammo. As far as Adventure Mode, my guess would be the same--you have to find them on creatures wielding blowguns. RedKing 02:23, 24 January 2009 (EST) 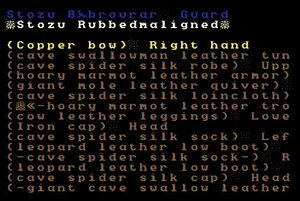 Dwarves can use bows! At least when they are trained by goblins to use them against you. I think therefore it's rather something cultural that does them forbid to use bows than their fingers. --Arni 16:45, 25 December 2009 (UTC)

Can be used by anyone? Are you sure about this, or does that only refer to Adventure Mode. I've had almost a dozen daggers in my Fortress in the past, and I can't get any of my dwarves to use them. --Thanatos 19:54, 18 December 2007

Well, dwarves are theoretically able to learn the skill, since a dwarf adventurer can, but you can't make your fortress mode dwarves pick one up and train with it. Best just to trade them away or melt them down. --Mzbundifund 20:01, 18 December 2007

I'm not going to start or create an edit war here. If you (Heliopios) are so sure you're right, then prove it. If you are indeed right I'll be happy to oblige you. Otherwise, I'm going to edit it back again if you can't answer to this in about a few days...

I also think that whatever happens, it should be pointed out that the aforementioned pikeman skill is only used in adventurer mode since dwarves can't wield it in fortress mode. If we're going to make this weapon entry fit with all the others, readers will assume that the skill written there is the fortress mode skill. --Eagle of Fire 01:06, 11 December 2007 (EST)

Is this enough to prove you wrong? Next time do some simple research before you go saying that shit doesnt exist. --Heliopios 01:58, 11 December 2007 (EST)

So what about a halberd and a pike? I've seen goblins wielding shields and halberds, I don't know about pikes. I always thought a halberd was a pike with an axe on the end. --Gotthard 12:39, 11 December 2007 (EST)

Halberds are shorter than pikes, about 6ft in real life. Pikes are closer to 18ft. In the raws it says it requires 2 hands, though I don;t know about real life. I don;t know what's happening with those goblins, maybe they are mutant 3 armed ones? Dangerous Beans 06:07, 1 December 2008 (EST)

I think I've found a bug. There's a pikedwarf in one of my coffins. I've never trained a pikedwarf, and I don't think I can. Moreover, I've checked my game log and it has no record of this person dying. Is it possible that Dwarven guards of merchant trains can be pikedwarfs? Maybe one of them got caught and killed in a siege and ended up in my mortuary. Revan 15:12, 16 February 2009 (EST)

Probably not what happened, but it could always be possible that pikemen dwarves could immigrate to your fort. --Myroc 15:47, 16 February 2009 (EST)

Possibly a member of a human caravan. Dwarves belonging to other civs still get buried in your coffins. VengefulDonut 16:56, 16 February 2009 (EST)
More likely a kidnapped child who returned as attacker with goblins. They too end up in your coffins.--Birthright 13:10, 15 September 2009 (UTC)

And a "spear" is a term for something you go snorkling with to catch little fishies. Just as there are axes for work and there are battle axes, there are mauls for work and there are mauls for battle. I've always pictured a "battle maul" as something MUCH different from a sledge hammer, even tho' when you use a "maul and wedge" (to split wood), you're (probably) just using a generic sledge from the hardware store. Just as a war hammer is much bigger than a claw hammer (perhaps starting at the size of a one-handed sledge, or bigger), a maul is another step up from that - cartoony big, looking more like a section of a treetrunk (banded and decorated, or not) on a proportionally large handle. In Conan the Barbarian, one of the bad guys had a maul, one that he missed Arnold Conan with and broke a huge plaster stone column in James Earl Jones' Thulsa Doom's lair. To me, that's a "maul", in the combat sense. Meh.--Albedo 21:44, 16 September 2009 (UTC)

Can goblins wield mauls? It says here that only humans can, but many hammer goblins in sieges have been seen with them. Are they actually wielding them or just carrying them? --Newtype0083 04:52, 16 February 2010 (UTC)