This is the first log entry from the bloodline game Outpost Ducimemal.

- A hard covered personal diary, written with a scribbly handwriting in little light. Self under estimating and insecure, but talented female miner dwarf's Dastot Rithmuzish' private log about the year of the challenge of her lifetime 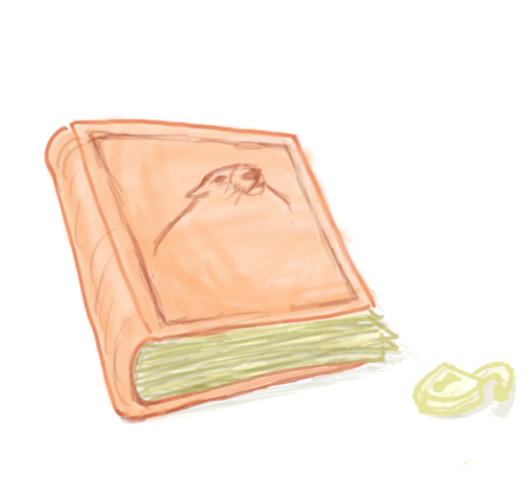 I've located an ideal place for an outpost entrance and started digging. since weve arrived on a rather flat land I plan on digging the initial base of the fortress beneath ground level.

Initial construction is going slow, the others are growing impatient, I need to get some storage and workshop halls dug out soon. I've preliminarily designed three main areas: the workshop hall with a stockpile for furniture(3), a food stockpile hall and kitchen rooms(2), and sleeping quarters connected with an assembly hall(1). I've also asked... The rest of the page is torn

The mason built his workshop in the workshop hall as soon as I'd dug out just enough space for him to build one.. artistic need to express? I dont know, but he's bald and grins a lot... He appears to be a bit weird. He started working on some tables and chairs which reminded me that I've yet to design a dining room.

Workshop hall is done, carpenter started putting up his workshop. I'm now working on carving out the assembly and sleeping areas.

I found small deposits of zinc, silver and lead... not terribly excited about it as I'm pressed by the tight schedules to get everything up and running..

Still carving out the sleeping areas so.. something too smudgy to be read ..i didnt witness this myself; but i was told later that there had been some violent scene with raccoons. apparently that fag mason had ran away screaming while the dogs teared the raccoons in bits. nasty.

The brewer and the cook got impatient and built their workshops in the hallway. I'm nearly done with the sleeping quarters. The engineer's also expressed his wishes to have a workspace, I'll probably have to enlargen the workshop hall after I'm done with the food stockpile.

Summers here, I've heard the mason and the carpenter talk about how nice it's outdoors. I finally finished the food stockpile and advised the brewer/cook team to move indoors next to the food stockpile. I'm going to quickly expand the workshop area and then go see the summer myself briefly.

In a notably worse handwriting - I've begun digging deeper just out of curiosity.

Made an office for the engineer for counting stuff. He seems to be good at keeping order and I trust him... plus hes the only one with an axe and knows how to use it. Started working on a dining room. Its going to be grand.

Realised that the autumns coming fast, and with autumn comes the caravan, and by caravan we need to send the king goods. realising that, i started a little project of my own. i've begun expanding the workshop area to the south, at the very south wall i intend to build a smelter and a forge. now im no metalsmith but i think i can smelt a few coins. ill experiment with a few different items and if it goes good im think a silver statue would suit well the assembly room that connects our living quarters. but well see more once i get the space for my smelting experiments. none of the other dwarves seem conserned about the coming of autumn, all concentrated on their work; herbalist gathering plants, rarely even see him, brewer and cook constantly in the kitchen area making food, perhaps even better so with the winter coming, mason and carpenter making furniture and other neccessities, and the mechanic keeping track of everything and occasionly chopping some wood. but it's allright, I think I can handle this smelting thing by myself allright and the king will be all happy.

Autumn is here and ive only just finished burning some wood. I'm going to have to hurry with the smelting.

The caravan's here! theyre coming, everyone's rejoicing. i've just got my first set of coins minted and they turned out quite allright. im hoping to mint another set before they leave.

Alright, much happened, first of all, the big thing: caravan. they just left, with them, two stacks of my silver coins. im pleased and i hope the king will like them aswell. the other one got sent as tribute to the king but with the other stack bought us stacks of meat for the winter. haggling was handled by who else but our order keeping all around handyman engineer, whos now our merchant,broker,bookkeeper and the only one with an axe and battle knowledge. for now i think i'll keep on experimenting with the silver, nobody seems to be bothered about it and i dont see digging neccessary at the moment. if needed i can always drop the smelting business and go back to digging, i guess, but for now, its an exciting new thing for me. a hobby, you might say. about around the times the caravan was here there had been some sightings of kobold thieves. im thinking the security guy should engineer us some defenses in form of traps, he cant be watching the entrance all the time because he's got so much other things to do.

The winter is coming, I mint two more stacks of coins. The galena ore has lately turned out to be mostly lead.

Two lads arrived. one nature-type who appeared to have knowledge of herbs and plants and one more well dressed crafter, a tailor of some sort. since there's not many tailoring jobs needed around here at the moment, mostly due to lack of materials, he was assigned to bookkeeping. one workload off of our orderkeeper's shoulders i suppose. the tailor guy, with his fine pig tail gloves and socks and hoods and caps and whatnots he looks just like the sort to be doing bookkeeping. perhap's hell like it well. I'll need to dig him an office. another miner also arrived, i'll be happy to get to know him. he's called Zasit. he's pretty cute. there was also some other guy, i didnt quite catch what hes good at but from what i observed he wasnt of very useful type.

Two more migrants arrived. other one appeared to be a handy looking wood crafter fellow. other one, when asked what he does best, stated 'animal dissecting'... so basically he just tears animals apart? yuck. hell probably get along with that maniac butcher well.

One more migrant arrived. A nice young girl who seemed to get along with the dogs well. She was speaking of setting up something outdoors to teach the dogs tricks. She seemed really nice, and i'd definitely rather have the dogs around her than around those two maniac dissectors or whatever the disgusting butchers callthemselves. ... Anyhow, this hopefully last migrant brings our small outposts total population to 14.. which means ill need to double the amount of bedrooms we have. atleast i have mining help now. I decided to go with a similiar round sleeping quarters with an assembly hall in the middle -setup for the second wave of migrants too, since there's only seven of them. im sure they will appriciate the quality quarters. Later on ill probably just have to dig up dull rooms for the incoming masses of migrants.. if well ever get that far....a scribble of a sad marmot

so the winter's finally upon us. we started carving out a new workshop wing with zasit. i like working with him. food seems to last well and things have been very peaceful around the fort. the weird mason ran about in the hallways yelling how he'd just made the single most beautiful thing in the world. ill have to admit, it was quite fine, granted it was just a door, but ive never seen a door that shiny. it was made off of that turqouse rock that's all over the walls of the eastern workshop hall. oh and about that fancy clothes guy, i was definitely right about him, he seems to enjoy the recordkeeping job to the fulliest. he looks very natural doing it.

We started digging depth with zasit again. i minted some more coins before that, though, im hoping the coins ive made this year will be a cultural heritage. i hope later we can look at the coins of this year and remember everything that has happened during this wonderful happening rich year we started out this outpost. with just 7 we're now a lovely community of 14 with everyone doing the best they can for the wellbeing of everyone. i think i did allright considering that i dont really think of myself as the leader type.. next year Cerol's going to take control and I'm happy about that, I'm really looking forward to see how he puts things to place, taken that he's really mostly been in control de facto even though this year was ordered by the king to be my commanding year.. but i think i fullfilled my part, i located the place i did the pioneer work...

I hope everyone else thinks it was enough aswell...