This is the fourth log entry from the bloodline game Outpost Ducimemal.

hmm.. wonderful. It seems that I'll have to take care of the fort for the next months.. Well, I think I'll leave things as they are now for some days, as many guys have their jobs to do yet. :/>

To deal with someone else stuff is always a mess.. uff.. x|>

Oh, no! Crap! There is something I have to do NOW. I can't delay it! I got a bad dream tonight about Gau, the cook, starving to death in his room! I don't want this to happens!

Ok. Well, sorta... haem.. I went into the Gau's apartment slamming the door. I said him:

«The fort or the mule! which one?»

I got angry and started slapping and punching him repeatedly. When I stopped he said loud, once again

..I restarted slapping and punching.

Finally he stopped me with an inflated face, big like a barrel of booze, whispering

(carpenter's hands are probably just that bit harder than the ones of a cook! haem..) Then I went to the kitchen and came back with food:

«Now eat something, then get out of this room and take a walk, have fun with your friends, and sleep weel tonight. I expect you to get back to your kitchen tomorrow. There is alot of work to do. And I'm the boss now!»

«Tomowwow? WITH FUCH FACE? Look at me!!»

And that's all. Problem solved. (I hope. I want my friend Gau alive and kicking. And by the way his meals are the best!) haem.. *cough*

Some new rooms got carved below the existing apartments to be ready for newcomers. Now Bed And doors are in productions. I've setup also farming for this month.

Today also Treehuggers merchants are here, but I wonder if they have something useful for us except for the usual load of clothes. I'll trade one of our many mechanisms (the worst I'll find :P>) for some of their seeds/plants. That stuff is always useful.

there's an added note below: woops.. I pissed off the merchants trying to leave them without profit. They went away offended.. haha. Gau's getting better.

Sigun Lolokromek today found all the things he was searching for and begun to work on his artifact!

Migrants came today: 18 guys, 2 children and their 4 pets. A bowyer, a brewer, a couple of gem workers, three peasants, a siege engineer, thresher, a couple of woodworker, a weaver and a clothier, a hunter, a fisher, a bone carver, a armorer, a metalsmith.

In some days all the apartments I asked for the past month got ready and now all the newcomers have their own room.

Nothing important. I just setup some stockpiles underground trying to remove some stones from the most walked areas.

Damn! Someone got back from a walk saying he spotted an army of goblins which is coming here from north-east!

I ordered to all dwarves to stay inside the fortress, but it seems that goblins are taking us with patience.. They're very slow, still coming but very slowly. And it's going to be a problem: we can't stay closed inside forever, but I just don't want to send my friends to the battle. We don't have so many soldiers nor armours/weapons and I'm sure a battle would yeld to dead and injured friends.

But some of our fort activities are on the outside and since they seems to be so slow I decided to let guys going outside waiting 'till the last minute to call them back. damn gobleh!

Anyway I have to plan something to move at least a part of the farming fields inside to let farmers work even if they're forbidden to go outside, and also I must carve a room to make a temporary trash stockpile or we will risk to have miasma everywhere any time a stupid bug will die overridden by workers.

I'm not longer so sure that these goblehs are really trying to reach this place. The situation is almost unchanged. I'm getting impatient..

DAMN! Catten Ralalatâh, the hunter, went outside for his usual hunting even with goblins around and has been struck down. Now I feel guilty. It was better to remove him from his job temporarily, forbidding any further hunting activity. But It's late now. And a bunch of stupids went outside to grab his body and his own things! I'd like to go grab him too, to protect at least what's left of his body, but it's too dangerous! FOOLS! This is exactly what goblins are waiting for. I got them all back just in time! Also one of our mules got tracked by an enemy for a couple of days, but luckily he found the way and came back safe.

Catten, we will come as soon as possible to take you back to the fort, for burying you in our cemetery. >:'/>

The child Domas started to withdraw from us, claimed a craftsdwarf's workshop and started collecting stuff.. I hope he'll find what he needs.

2 good news in a row: Domas Edëmaned found all the stuff he was searching for and managed in some days to create his Zuglarakil Kovest Merir, a wonderful turtle shell ring!

And in the meanwhile, having the goblins moved a bit aside, one of our best runner (the farmer Ézum Othtirist) managed to grab the corpse of our Catten! >:'D>

Goblins are gone and autumn is here along with our friends dwarven merchants. Some of our plants on the outside farm are gone, but miners just finished to carve an underground farming area to avoid such problems if we're attacked again in future.

I signed the trade agreement with the dwarven merchants.

I asked for weapons/shields because I noticed that we need to improve a bit our army (sadly we can't buy experience for our soldiers..), I also asked for any kind of meat (Tthis will keep Gau busy and will grant us some tasty meals too. ;)> )

They seems to need with highest priority shields/bucklers, powder & musical instruments. They also need cloth a lot. Less important but still needed amulets and rings, and.. huh? I forgot the lowest priority stuff on their list! x|>

I asked miners to start digging down till the lowest level deep into the mountain, to make a big cemetery to give all our dead friends a proper place to rest in peace. (I plan to add also a secret deep tunnel to connect this cemetery with the right side of the area: it can be useful to escape, or to take enemies from the side, or whatever.. who knows?)

Aah! Migrants again! A Marksdwarf, a peasant, a mechanic, a metalsmith, a clothier, a dyer, a furnace operator and 3 animals. have I counted them all? I hope..

Today I asked miners to dig a big room under the mule-statue/fishing-pool to use it for trash. The refuse stockpile we got so far is now too small, and if we'll need to stay inside for whatever reason we'll also need a place for the trash.

Crap! Nemppu really scared us today.. He was working on the new apartments and suddenly dropped down his tools and ran out. Eyes absent, not responding to calls. He was searching for something. A mason workshop, and we suddenly understood: he got possessed!

Now we can just hope we have anthing this spirit may need...

Pfew! He has been very lucky this time! It seems that this spirit is easy to satisfy. He needed just 1 or 2 things to start working. Good. Now he keeps muttering something.. Dimolazin.. sounds like a drug to me, but no one invented the pharmacy, not yet.. I wander what he's working on...?

Added note: he finished it in 2 days. It's a wonderful shist throne!

Crap. Goblins are here again. And this time they're nearest to our entrance. >:/>

Not so bad so far. Goblins are approaching so slowly that they'll be tired before to meet us. Our only problem at the present time is that we can't get trees while we're underground.

New apartments for the mayor are almost ready (he got promoted so he required a better place. uff..)

I finished my project for the catacombs: 3 levels height x 1 tile wide tunnels, with 3 set of alternate vaults on the walls. Higher level will be carved and used 1st. Then the 2nd and the midlevel-ceiling/toplevel-floor inbetween will be removed. Then the lower level will be digged and used. Vaults can also be used as passages for other tunnels. Bigger tunnels and/or rooms can be carved and linked in a fashinating maze shape! Hoplà! 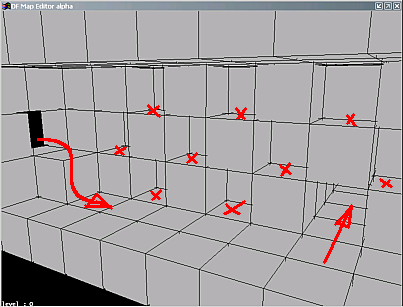 Anyway, since my time is going to finish I leave this project to the next boss without start diggin it: he will decide what to do. I also want to leave a note about a new system of prisons: 3x3 rooms, with 2 tiles long entrances (restrain will be placed in the center of the room, a bed on a corner, and the door must be kept 1 tile distant from the 3x3 area to avoid to have a berserk destroying it and kill accidentally someone passing nearby, like people carrying food or water for other prisoners).

The next boss will decide about this too.

3rd level of apartments is almost done, except for the beds, but goblins are still around and we'll wait for them to get away from here before to go out searching for wood.

We're going out of meat and fishes. I'm happy now that my request for the merchant was right about meat. People here can eat almost anything if there's enough booze around, but something different would be nice every now and then. Sadly I forgot to provide stuff merchants will come searchign for: instruments, amulets...

But we should have somewhere a couple of bins full of that stuff, though.

Crap! My time is almost finished and there are still so many thing to do...

The mayor's apartments to finish (engraving?), soldiers training, lack of wood for beds, lack of meat... all those people who want to go outside to store items..wtf? I forgot to check that too.. no time no time.. dang.. moving kennels inside, building of big storeage rooms to replace old, small ones.. uff.. too many thing, not enough time..

Well, nevermind. I'm tired. Someone else will take care of all this..

I'm so tired.. I just want to go back to work to my workshop.