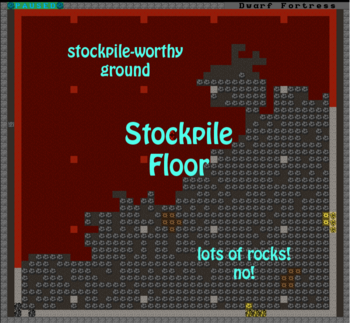 Garbage dumps are activity zones in which dwarves will throw items marked for dumping. (The garbage dump may be inappropriately named, as it's more of a matter compression zone. The specifics are beyond human understanding; however, dwarves are in fact capable of compressing an infinite amount of matter into only one tile, as long as it is specified as a garbage dump.)

Garbage dumps are not the same as refuse stockpiles.

Garbage dump zones are useful for many things beyond garbage disposal; they can create quantum stockpiles, transport materials to a job site, send items to the trade depot when no caravan is present, drop rocks on enemies below, and numerous other uses.

Items can be marked for dumping either by using k-d (one item at a time), or d-b-d (bulk dumping). NOTE: Bulk dumping designates all items on the tiles for dumping, even built furniture, the construction materials making up buildings, items inside containers, etc. In the case of built furniture and building components, this will have no immediate effect; however, upon deconstruction the item will immediately be dropped on a nearby square by the dwarf hauling the item to await disposal in the nearest dump.

Garbage dumps only accept items that have been marked for dumping, require dwarves to have refuse hauling labor enabled, and are subject to refuse standing orders (o-r).

Dwarves usually throw dumped items in the nearest available garbage dump, although this is not an ironclad rule. If a nearer zone becomes available after they have already started the job they will ignore it. They also have a preference for open space dumps. If a garbage dump is located next to open space, dwarves will always stand on a garbage dump square when throwing into that open space, even if it could potentially be done more efficiently. If a garbage dump is located next to multiple tiles of open space, they seem to prefer the one farthest to the northwest. If a tile to the north and a tile to the west are the only tiles available, they will throw to the west. Such garbage dumps can be a very efficient method of moving materials to the lower levels of your fortress. However care must be taken to prevent dwarves and livestock from being struck by falling objects, perhaps with traffic designations and pastures.

Dwarves will not dump items that are in a tile marked "Above Ground" unless you allow them to (o->r->o).

Items dumped into magma that are not magma safe will permanently disappear, which is useful for disposing of clutter and increasing FPS. Otherwise a single tile (either a dump zone, or the ground below the open space) will hold any number of dumped objects. Dumping items into magma can be dangerous due to the magma mist generated when objects fall into magma. It is advised to dump items into magma from a hole several z-levels up to avoid !!Dwarves!! running around the fortress.

Dumped items are automatically marked as forbidden, preventing dwarves from touching them. Therefore, these items can't be used, or even selected, in workshop jobs, etc.

If for some reason Urist is yet again incapable of locating his favorite pair of cave troll leather socks, he should think to look among the black hole of matter that is the nearest garbage dump, as they could be snugly lodged between a few billion rocks.

You can to reclaim Dumped/forbidden items in 3 different ways: