Silk farming is the process of harvesting large quantities of silk from webslinging creatures like giant cave spiders. Several setups have been devised to farm silk quickly and safely, but successful silk farms have a few traits in common:

Cave spider silk farms are probably the easiest silk farms to set up since the spiders are so small that they don't represent a serious danger to your dwarves.

Since occasional bites are unavoidable, assigning the loom to a single weaver is important. Best use a dwarf already bitten by a cave spider and affected by the resulting dizziness. Despite the slowing effect of cave spider dizziness this farm will produce a steady stream of silk.

All cavern layers spawn webs (1). All that is needed for a modest but very safe supply of silk, is to mine our vast areas of the cavern layers. These don't need physical connection to the cavern, it suffices that they are in the same layer as the cavern. Silk webs will start to appear in them as well - that makes it very easy and safe to collect silk. If mined early after embark, this can significantly boost the early supply of silk.

There is a small chance of injury if the creature gets hit by the projectile silk, but having the creature stand more than 3 tiles away from your spider seems to prevent this.

Note that a simple pit in the harvesting chamber will not work--the bridge is required to cause the "web objects" to drop to the next level (and stack). Because falling items are deadly, it is necessary to collect the webs on the "holding" bridge and only drop them into the collection chamber when your weavers are clear. Also, webs "tossed" by the retracting bridge can injure anything they hit, so your bait dwarf may require occasional replacement. One spider can easily keep several weavers busy, and collecting all the webs provides a great opportunity for cross-training.

Extra automation of the silk farm

Farming silk from other procedurally generated creatures is somewhat more difficult and less rewarding. As level 2 building destroyers, these creatures can only be contained by bridges or artifact doorways. They are also immune to traps, making positioning in the farm rather more complicated. Finally, without a value modifier, the collected silk will be equivalent in value to common cave spider silk. They do still provide a nearly-inexhaustible source of silk thread, and with some effort their webs can also be used to cage other trap immune creatures. Also, webslingers with modified material properties (e.g. IGNITE_POINT) can produce webs that retain those properties (e.g. fire-safe or magma-safe silk). 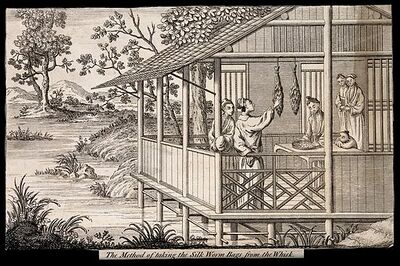