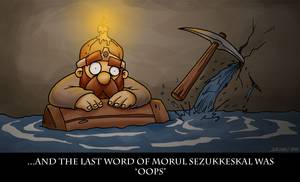 It happens.
Art by Darnat-D

Flooding refers to filling a chamber with a liquid, traditionally water, for a variety of reasons. This is achieved through numerous methods, with varying degrees of fun. For more information as to why on <WORLD_NAME/> any dwarf would want to do this, see irrigation, trap design, and unfortunate accident.

The simplest way to achieve controlled flooding is tunneling right up to a riverbed and placing a floodgate to stop the flow when the water is initially released. Then, pull the lever to let the water enter the chamber under your careful eye. In order to do this safely, it is recommended that you channel into the riverbed from above instead of puncturing it from the tunnel, and then pull the lever that activates the floodgate. Having a pressure plate somewhere in the room assures a controlled shutoff.

When the water in question is one Z-level below the desired level (for more than one level, see pump stack), particularly in the case of an aquifer, it can be very easy just to set up a dwarf-powered screw pump near a channel to flood rooms when necessary.

Pressure flooding refers to using pressure mechanics to push water from a source, through a channel, and up into an area. Unless the destination room is above the source's pressure output level (usually the level of the source; see these examples for more information), no pumps are necessary. In addition to the possibility of moving the water through a U-bend instead of a straight channel, pressure flooding can deliver more water more quickly than using a standard flow.

Be warned: Magma is inherently more fun than water. Screw pumps and floodgates must be made of magma-safe materials, and a failure to account for pressure can result in hilarious antics.

If you accidentally circumvented your floodgates (e.g. mining around it), read this section for how to clean up.

Assuming that you have some surviving miners, the easiest way to clean up a flood is to create a drain into a cavern layer below. This is accomplished by digging an up/down stairway parallel to the flooded areas that terminates somewhere in a cavern, then joining the flooded chambers at their lowest point.

If this solution is undesirable, consider draining the liquid into a hastily-constructed pump stack, atom smasher, or simply any large space in which the liquid can spread out and evaporate.

As long as there is at least one tile below 2/7, both water and magma will slowly "evaporate" into thin air (yes, water and magma), so once your passages or rooms have been sufficiently drained, the problem should sort itself out eventually. To speed up this process, get the liquid into a larger area so that it can spread out more. If necessary, a screw pump or a bucket brigade can help get the water level low enough.

If your flood consisted of water, then any surface that it touched will now be covered in mud. This could be a benefit if you were attempting Irrigation, an inconvenience if you don't want random plants growing in your muddy hallways, or possibly even a dire risk if the mud has covered your only masterwork engravings (growing plants will destroy the engravings, causing severe negative thoughts in your engravers).