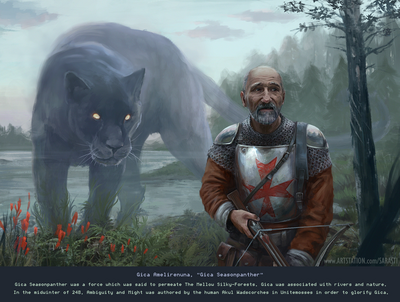 "Gica Seasonpanther" was a force which was said to permeate The Mellow Silky-Forests. Gica was associated with rivers and nature. (post)

A force is an abstract entity that acts as the equivalent of deities for elves. Elves do not worship deities, but believe in multiple forces (one for each elven civilization) that permeate nature. Forces are generally associated with nature-related spheres, such as rivers. An unmodded game has only spheres from forests: they, as most of the biomes, are associated with nature and rivers. If the biome has no plants (trees, grasses etc), the force will be associated with animals instead of nature. The second sphere of the force is defined by its terrain feature, in most biomes it is rivers, but in mountain biome it is mountains, in any lake biome it is lakes, in any ocean it is oceans, when glacier and tundra have no second sphere.

Forces, unlike deities, never act in any way in the current version - they will never curse anyone, give out slabs etc. Elves pray to forces, and sometimes write books about them as a way to glorify them. This may result in a single force having literally hundreds of books authored after them. Interestingly, elves that were turned into night trolls will continue worshipping forces and writing books about them from their lairs.