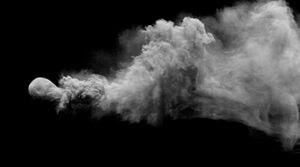 Some dwarves should just stay on the patch.

Steam is the result of boiling water. This is distinct from mist, a similar looking product of water falling, or smoke. Rain falling on a pool of magma may cause steam, as will magma boiling off water that is covering something that is magma safe (like an obsidian stone). Magma is the most common source of the temperatures needed to boil water, but some burning items may create steam when submerged, as may some creatures with very high body temperature.

Steam is visibly harmless in the current version. Forgotten beasts are sometimes generated to be composed of steam, and these creatures are far from harmless, though they are exceedingly fragile due to the material properties of steam.

Another product of water and magma mixing is obsidian.

It has been reported that steam can be produced from rain falling on the blood of a forgotten beast who possessed the fire breathing ability.

To generate a continuous steam generator, build a magma-safe bridge over a magma flow. Connect a space containing the bridge to an ample reservoir of magma, and allow water to fall on it from above. This will produce a continuous cloud of steam that spreads throughout surrounding squares.