This article is about exploring rock layers while digging through them; if you're looking for tips for exploring already-discovered caverns, check Caverns#Methods of Exploration

Once you've had enough fun to have a basic fortress working, it becomes necessary to dig down in search of ores, gems, water, etc. Exploratory mining attempts to dig out as little as possible, in order to see as much as possible, using clever digging patterns.

The main goal of exploratory mining is to find something which lies in the stone layers, be they raw materials such as ores, gems and other useful stones, or special features such as caverns and magma. A secondary goal for exploratory mining is to increase the count of visible subterranean tiles, which is one cap on the eligibility for strange moods. While minerals are quite common, reducing the need for extensive exploratory mining, one might still want to search for rare gems, some of which appear in small or even single-tile clusters. Another might want access to the caverns as soon and as easily as possible, for instance to get access to subterranean water or to set up an underground tree farm.

Either way, applying a good exploratory mining method will ensure you will find what you want as soon as possible, and without missing anything.

All of the interesting stuff is below you when you start - digging straight down may be the fastest (though not the safest) way to find points of interest.

Those interested in *safely* exploring the depths may wish to create a level every so often where the stairway is broken so you can create barriers (like doors or lever-controlled floodgates) or garrison military squads to deal with any discovered hostiles.

It is also recommended to isolate your exploratory mines from your fortress proper, to allow the mines to be closed off and removed from pathing calculations.

Patterns are represented by a unit tile. This unit tile is repeated throughout the area intended for excavation to create the desired pattern. Each pattern is analyzed with the above factors in mind. Note that single-floor patterns can be enhanced to explore one additional z-level by replacing mining designations with either channel or ramp designations; doing so effectively doubles their efficiency. Designating "down stairs" instead will reveal one additional tile directly below each tile mined.

All tiles are excavated. 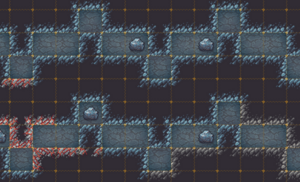 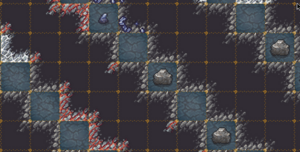 A variation would put diagonals every 10 or 20, laying the groundwork to fill them in later for higher visibility if desired.

Mine shafts, grid of every 3 tiles[edit] 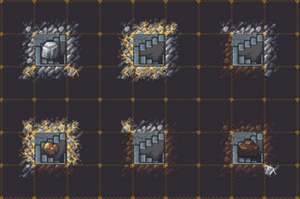 It takes a lot of keypressing to designate, although you can save some effort by designating every third row across the entire width and height of the area to be excavated and then removing the designations (d-x) on all but every third column. Additionally, a Linux script for digging the entire mine can be found here: https://docs.google.com/document/d/1qWyeq27C4DJwjOclEhPATgUlhtNEXrxnGcuNHx-M_ZU/edit?usp=sharing.

For a discussion on optimizing dig times with mineshafts, see mineshaft stitching.

The pattern as shown is 1 up-ramp every 7 tiles vertically, or 1/14 horizontally, though this could be turned 90 degrees. The downramps are shown as empty space, but are only designated as up ramps on the level below. This pattern can also use channel designations in place of ramps to mine in a downward direction. (Be sure you know how ramps work before trying this one!)

Exploratory mining example: diagonal ramps pattern, every 14 tiles in one direction and every 7 tiles in other direction 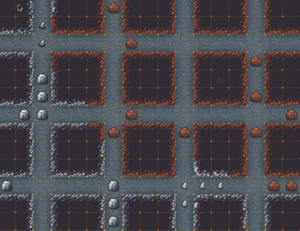 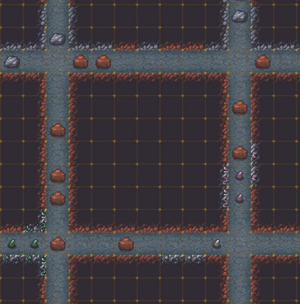 If you think you may wish to later use the "rows" method (above) for 100% visibility, this could be based on a spacing of 6, 9, or 12. Wider spacing starts to risk missing even veins. 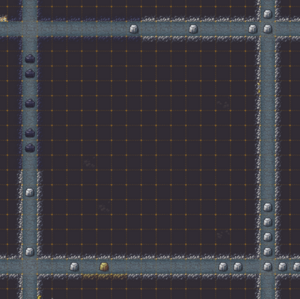 With any grid pattern, a (much) wider version could be used to start and to locate specific stone layers/areas, and then filled in later in a tighter pattern where you want if you're not lucky the first pass. If you plan to use the 3-grid pattern (for a 100% tile reveal) later, create your grid with intervals that are a multiple of "3". If you are only looking for veins, features or just don't care, then do as you will and play it by ear later.

When the fortress is large enough, nearly every dwarf is standing idle, you have plenty of picks, and just want to mine it all (Environmentalist Hippies can go to HFS!), complete excavation may be in order. The risk of cave-in or stranded dwarves prevents simply designating an entire mountain Channel, but mining the whole thing can be done with minimum player effort.

After a long wait, the entire block of stairs will collapse, leaving the entire area safely excavated. The lever can now be removed, and all goodies from an entire mountain can be collected.

Note that, by exposing the mined tiles to sunlight, they no longer count towards the cap for strange moods.

Each 48x48 embark tile has its own patch of cavern floor, and this patch is most easily discovered by digging through the middle of the embark tile. Dig a vertical shaft 24 tiles diagonally in from the corner of your embark, and repeat as necessary for each corner of the embark. A 2x2 site will be completely covered by these four shafts, and a 3x3 site will require five more shafts (i.e. a total of nine) to explore every embark tile.

A default worldgen will create a mixture of large and small cavern spaces, and these spaces may be either open or filled with rock columns. Small spaces can be missed entirely by a 1x1 shaft, and rock-filled ones can have their stone needles deftly threaded by your miners.