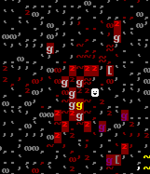 A creature enters a martial trance when it is fighting multiple enemies at once. The trance offers a boost to the creature's abilities – a creature in a martial trance has a significantly increased chance of blocking or parrying an attack, and is more likely to hit their opponent. However, it does not give a direct damage bonus like enraged. The symbol for a dwarf in a trance is ! which will flash over their icon. A dwarf also appears to occasionally enter a trance even when not fighting, though this behavior is rare and may be a bug.

This is also a great way to dispose of bogeymen in adventurer mode, as you can dodge most of their attacks, and most of your attacks will land successfully, regardless of the difficulty of the shot. 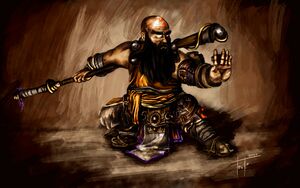