how u type on internets?

29 years old as of October 29th, 2013. Adamant believer that society is founded on the principles of doing what is best for everyone, even to the extent that it circumvents the law: believes strongly in society as opposed to law and justice. Intended career path: regular member, RCMP (you might find this ironic, but track him down on irc://irc.newnet.net/ #bay12games and he'll talk your ear off about why it isn't).

Considers himself Liberal when speaking to Canadians, Libertarian when speaking to Americans, but usually votes for the extreme-left New Democratic Party because they seem to be the only Canadian political party genuinely interested in serving the Canadian interest instead of their partisan agendas. (And even that's a stretch.)

Hobbyist game developer. Likes writing games, but is too much of a perfectionist to release most of them in their unfinished states, and has too many diverse interests to commit to a single one of them until completion. Excellent grasp of game design and balance due to some sort of ability to imagine the finished product well in advance of getting it there (which might be half of the reason he never finishes them).

Apparently enjoys talking about himself in the third person.

Hello, my name is Simon[edit] 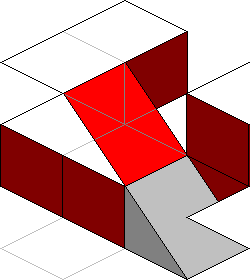 A diagram of a valid and invalid ramp. (It then occurred to me that the top ramp is still usable, but only in the diagonal directions.)