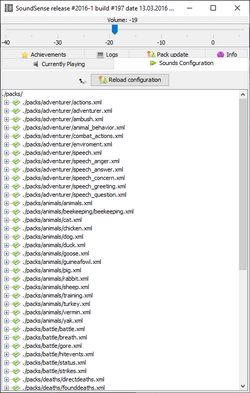 SoundSense is a sound-engine tool which replaces the single background guitar with a collection of sounds and music that play depending on context.

This context is drawn mostly from entries in the gamelog, though recent versions of SoundSense come with dfhack plugins that significantly expand its capabilities.

SoundSense has a bay12 forum thread, an official website, a DFFD download page, is open source here, and has more advanced documentation here on the wiki.

SoundSense is focused on Fortress Mode, and provides a very large set of audio cues for events - it can be very helpful in alerting the player of combat, a strange mood, ghosts, weather, and many other things.

Adventure Mode kind of works. The battle sounds function quite well because they are mostly the same as those in Fortress Mode. But SoundSense is still a bit lacking in other adventure sounds, because Adventure Mode does not log many useful events. For example, encountering a megabeast or a quest mob is resolved in chat, leaving no message in the game log to trigger SoundSense.

Occasionally, the music in SoundSense will stop for a short period; this is not a bug - it was done to let ears rest. A few tracks have a silent start and may take a minute or longer to become audible. If in doubt, you can see what is currently playing in GUI under the volume slider. During periods of silence, this will typically show "10s silence" or similar.

SoundSense will only play music immediately on load if the (included) "soundsense-season" script for DFHack is run (which it is in the default configuration) - otherwise it will wait until the season changes; there is no way to tell before this which music to play.

Note that a simple install of SoundSense includes only a few sample sounds, for the proper effect you need to download the soundpack.

Finally, remember that SoundSense needs to run in the background. Ideally, you should start SoundSense BEFORE you start Dwarf Fortress.

SoundSense is included and preconfigured in the Lazy Newb Pack and requires no setup beyond pressing "update soundpack" to download the sound files.

SoundSense was designed for "vanilla" (unmodified) Dwarf Fortress. It should work fine with most mods, but there is no guarantee of compatibility. Some mods create unusual behavior or involve events that SoundSense does not detect - in other words, SoundSense lacks sounds for mod-specific events. For example: gunshot sounds for mods that add guns are not included, but you can add them for yourself. Some events that work normally in vanilla DF may also trigger so frequently with a mod as to be very annoying.

Installing Java is not necessary if you have any apps that distribute Java, like Minecraft or Mathematica. To do this,

The first 3 lines of soundSense.sh should now read something like:

Locating the gamelog.txt may be a bit difficult, because the file for Linux versions of Dwarf Fortress is not in the usual spot. To find, simply navigate to your home directory and open the .dwarffortress folder. (it is hidden by default) The gamelog file will be located inside.

The game does not distinguish between combat sounds and sparring sounds. You can remove the combat sounds under packs\battle, (LNP\utilities\Soundsense\packs\battle). Consider renaming the subfolders of blocked/hit/miss/movement/wrestling/unitsurprised. You can then rename them when real combat happens.