Finished goods are items that go to a finished goods stockpile when made. Many of these items are frequently referred to as trade goods as they are lightweight and only useful for trading. They include crafts, goblets, instruments, toys, large gems, and totems, some of which have several sub-types.

There is no way to issue a job order for a specific subtype of a good with multiple subtypes. If you have a mandate to make piccolos, the best you can do is to order instruments and hope for the best.

One order to "make crafts" consumes one resource and produces one to three items, two on average. All subtypes, if they can be produced, have an identical chance to be produced.

¶ Goblets have no subtypes, but have different names depending on the material from which they are made: metal and glass goblets are simply goblets, stone goblets are called mugs, and wooden goblets are called cups. Stone mugs can be found under the 'All' section of the Move Trade Goods interface.

Note that dwarves never drink booze out of mugs, preferring instead to drink straight from the barrel. However, they can be used to transport liquids in Adventure Mode. 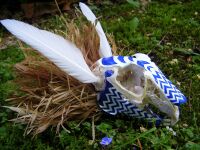 ç Totems are made from skulls by a bone carver at a craftsdwarf's workshop. Totems cannot be built as permanent structures, but careful management of custom stockpiles will allow the player to place totems at artistically pleasing locations around the fortress.

♦ Large gems have no subtypes. It is not possible to issue a job order for large gems; instead, cutting any gem or raw glass has a chance to produce a large gem instead of ordinary cut gems. Gems and glass also have a chance to be cut into crafts this way. In fact, glass crafts cannot be made directly at a glass furnace, and must be acquired through the processing of raw glass by a gem cutter.

Most materials can be used to make trade goods. On occasion, a dwarf in a strange mood will make a trade good out of a material not normally suited for it (e. g., a cloth instrument).

1 Note that wooden cups, instruments, or toys can only be made using the job manager, as the craftsdwarf's workshop interface does not permit selecting them.

2 Skull totems, like bone crafts, are also made by a bone carver at a craftsdwarf's workshop.

3 Glass Crafts and Large Gems are obtained by cutting Raw Glass at a Jeweler's workshop, with the Gem cutting labor.

5 Although you can make Adamantine cloth, you can not use it to make crafts. Instead, you can use Adamantine wafers at a Metalsmith's forge.