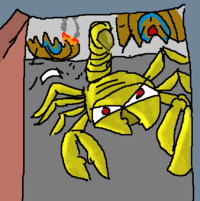 A giant desert scorpion doing what it knows best.

The giant desert scorpion is a high-value creature commonly found in deserts and although they aren't found in large numbers they are dangerous combatants.

However, only their tail is poisonous and they don't attack with it often, needing to latch on to their prey with their pincers first.

Some frustrated scorpions have been reported to be invading fortresses to destroy wooden constructs and their [BUILDINGDESTROYER:1] supports this claim. Due to the relative scarcity of wood in their biome they often end up going well out of their way to find wooden constructions to rip up; archery targets have proven to be a popular, er, target.