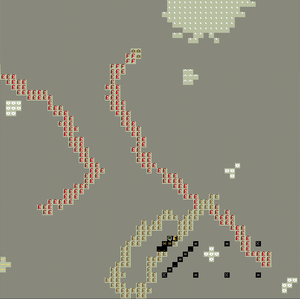 (click to enlarge)
Veins and clusters, fully revealed. Note this unusual copper (brown) vein has been folded over and reconnects with itself, and also overlaps one of the two hematite (red) veins. Also note the brown gems in the very top of the center hematite vein, and the various small clusters of gems across the level. The bottom quarter of a large cluster of alunite is at top right, with a small cluster of native aluminum (white ^'s) below it. This area is well above average - some areas this size have nothing to offer but callouses and disappointment.
(This view uses a 3rd party utility, and is not easily achieved in an unmodified game. See smaller image, below, of this same map with a more typical view.

If a stone is not a layer stone, then it is found within a layer or another stone as a vein or a cluster. Veins and clusters do not jump z-levels, except by coincidence - a vein or cluster is limited to one z-level, but that doesn't mean the same stone can't be found above or below as well if the conditions (the surrounding stone) are right.

Generally speaking, if a block contains a large cluster, it will not contain any other independent veins or small clusters - additional minerals will still show up if they explicitly occur within the cluster itself (such as native platinum veins appearing within magnetite clusters or chromite within olivine). Additionally, raw adamantine veins are a notable exception, in that they can also extend between Z-levels.

Rarely, two separate veins (of the same or different stone/ore) can be found "doubled", two next to each other, or (also rarely) folded back on themselves. Unrelated veins and clusters can intersect or overlap with each other - only one type of stone/ore/gem will be found in any one tile, however.

Note that erosion (during world-gen, pre-embark), magma (pools and pipes), water (brooks, rivers and pools), pits and chasms may reduce exposed veins and clusters to a fraction of their original starting size, and/or cut through them, exposing only the remnants, or two parts of a single vein in two nearby areas on the same z-level.

Raw adamantine is neither a typical stone nor metal ore, and veins of raw adamantine do not follow any of the normal patterns. They tend to be narrower, more spidery, and in fact are the only veins to (predictably) connect across z-levels, up and down within that 48x48 area block.