Black sand on chalk with sparse grass. A saguaro trunk is visible on the top-left.

Black sand is one of the several types of sand that can be found in soil layers. Black sand layers occasionally contain an aquifer.

It can be gathered into bags and used for the purpose of glassmaking, and it can also be used for farming just like any other soil layer. 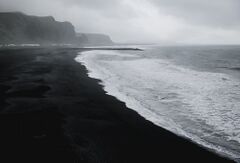 Black sands are usually made up of large quantities of magnetite. Such black sands (also known as mineral sands or iron sands) are found in various beaches via rivers from erosion and are concentrated via wave action and currents. Other types of black sand include deposits composed of basalt fragments near active volcanoes.