Cave moss is a peculiar grass-like growth that occurs in underground caverns. Animals such as cattle or yaks can be designated to graze on it via pastures.

Cave moss is functionally identical to floor fungus, but should not be confused with normal moss. As with most underground grasses, cave moss only appears after a cavern containing cave moss has been discovered.

Cave moss will grow on a below ground soil surface or on a muddied stone surface that has not been smoothed. The amount of mud on the surface does not affect the distribution or growth rate of subterranean plants [1]. 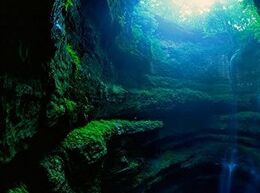