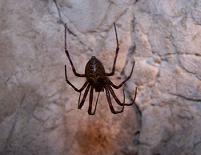 A cave spider is a type of vermin. It produces webs that can be collected and woven into cave spider silk thread. Cave spiders can be annoying and beneficial at the same time. They will usually hang out around underground areas like caverns or underground water sources. They will leave webs around these areas or even in your fortress that can be collected via the 'collect webs' job at the Loom, which is created automatically when webs are around. They can be annoying because they will bite the occasional pet or dwarf, though they're only mildly venomous.

Unfortunately, taming a cave spider does not provide a source of controlled silk production, as cave spiders in cages will not spin webs. Because of this, a silk farm requires an area (potentially cleared and sealed, for dwarven safety) in which the vermin can run wild. Since cave spiders do not reproduce like creatures, any such farm will need to be in a biome that generates cave spiders. You can also dig out a room in an upper level (near your loom) and attach a lever to a placed cage "q,a,j" (much the same as you would with caged goblins, though be sure to tame the spiders), once the cage has been filled with tame cave spiders, "q,a,P" pull the lever, releasing the spiders (that have been caught in an animal trap baited with meat), they will be released and begin filling the area with webs without your dwarves and pets having to deal with bites.