In the real world, an object is stressed when a force is applied to the object. Depending on the nature of the force applied, this stress can take a number of forms, and the object can respond differently based on its material and how that material handles different stresses.

In the material raws, whenever you see 'yield', 'fracture', or 'strain at yield', that property is a stress-related quality.

At present, DF seems to only apply forces during combat, and thus only stresses objects (generally armor and various body layers) at that time.

There's a lot of stress-related properties, what do they mean?[edit]

The first thing you'll notice is that the second word in each stress variable is one of Yield, Fracture, or strain at yield. These are mechanical performance terms.

The first set of words are things like Impact, Bending, and so forth. These describe modes of applying force.

Yield: This is almost certainly 'Yield Strength', which is the amount of stress needed to cause a material to go from elastic deformation to plastic deformation. (That is, if you cease stressing the object, does it revert to its original shape or not). Since most objects only elastically deform over small distances of deformation, high Yield values generally means it takes a lot of force to noticeably 'stretch' them (but see strain at yield).

Fracture: The fracture point is the amount of stress or force necessarily to cause the material to fail, or in other words, to break.

Note: Strain at yield is the inverse of the Elastic Modulus. Thus a highly elastic material has low elastic modulus, and engages in less elastic collisions.

Impact: Force applied by a sudden strike, like a hammer.

Compressive: Force applied by exerting pressure on an object, like trying to squish something between your hands.

Tensile: Force applied by pulling on something, like suspending one object via another. (e.g., if you suspend an elf from a metal pole, you are applying a tensile force to the pole).

Torsion: Force applied by twisting something. Note that you're twisting some portion of the object relative to itself to cause a torsion stress to be applied to it. (Consider trying to twist a metal rod by grasping at either end and attempting to wring it - yes, you'd have to apply a lot of force to succeed).

Shear: Force applied by pushing part of the material so it tries to slide relative to another part of it. Ie, pushing at the top of an object when the bottom part is fixed to the ground is going to primarily apply a shear stress to it (the top part will try to move in the direction you push, and the lower part will resist this shear stress).

The Dwarf Fortress combat system does not use all material properties at present (0.34.11). Weapon and armor damage/wear/decay is not tracked.

The mechanics governing how material properties impact the protection armor provides against projectiles have been studied reasonably carefully, and are described below. Armor protection from melee weapons has not been studied in detail, although it likely shares many similarities with ranged weapons. Note: all of the below is based on recent (0.34.11) experiments, and many results may be approximate or incomplete.

The main factor determining if a projectile penetrates armor is its momentum. Material properties of the bolt/arrow (except for IMPACT_YIELD, which will be described below), as well as bolt quality and marksdwarf/archer skills do not appear to matter (the skill of the marksdwarf determines if the bolt misses, hits, is dodged, or is blocked with a shield). Dwarven weapons launch projectiles with roughly constant momentum. However rounding of projectile masses can result in some very strange behavior. The complete calculation used to determine projectile momentum is as follows:

Interactions Between Projectiles and Armor[edit] 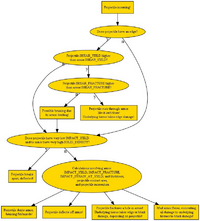 A simplified flowchart showing how material properties are used as a projectile contacts armor.

When a projectile strikes armor, there are several possible outcomes:

If the momentum of the projectile is not too high, then chain armor can convert the edged damage normally caused by projectiles to blunt damage, resulting in chips, fractures, jams and bruises, but no tears or cuts. Plate armor does not appear to provide this type of protection under any conditions tested so far. It is not yet known how the momentum needed for edged damage to penetrate chain armor is calculated, but for the cases examined the momentum needed is many times larger than those observed for in-game projectiles.

For a blunt hit, having penetration depth means that it can push fragments of bone into other parts, such as other bone or the brain. If the hit has no fragments, it will break rigid layers (materials with very low strain at yield) and keep going as bruising blunt force, not tearing the body parts underneath. [1]

The Projectile Absorbs the Force of the Collision[edit]

If the projectile does not cut right through the armor (armor material must have SHEAR_YIELD and/or SHEAR_FRACTURE greater than or equal to the projectile material), then it must push in a chunk of the armor. If the armor is not strong enough to resist being pushed in (armor resisting the blow is covered in the next section), then the force to push in the armor is proportional to the mass of the chunk of armor. If the projectile material is not strong enough to exert this force, then it is deformed and deflects. The following algorithm determines if this type of deflection occurs:

In-game, this type of deflection is observed for wood bolts impacting metal armor, and explains why adamantine is observed to be the worst armor for deflecting wood bolts, as it has the lowest density. As explained below, adamantine can barely stop wood bolts using the "Armor Absorbs the Force of the Collision" mechanism, and wood bolts would easily fracture copper or steel armor were it not for the higher densities of those metals causing the projectile to absorb the force of the collision instead.

The Armor Absorbs the Force of the Collision[edit]

This form of deflection depends only on the momentum, but not the material, of the projectile. The armor will provide 50% protection from projectiles if

It unclear if or how the thicknesses of multiple armor layers covering one body part stack. This formula is approximate, and the exact values of the coefficients in the denominator may not be accurate. The amount of protection provided drops sigmoidally from 100% to zero over a fairly narrow range. Furthermore, negative status of the target creature (fallen over, unconscious, etc.) are known to significantly reduce armor protection provided. These numbers will roughly predict the results for an ideal, uninjured dwarf, and worse protection should be expected in other cases. The exact manner in which status affects impact armor protection has not yet been explored.

The manner in which armor offers protection is different depending on whether the bolt momentum is greater than 50000/IMPACT_STRAIN_AT_YIELD. If momentum is less than this threshold, then armor can completely deflect projectiles, while if it is larger, armor can significantly slow projectiles so that they cause only bruises (not tears, chips, fractures, or jams).

This type of collision is only observed in-game for bolts with densities less than about 750 (most wood, adamantine) deflecting off adamantine armor. In all other cases the bolt momentum is far to high to be stopped by any armor using this mechanism.