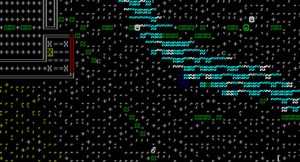 A puddle of vomit is represented by the same character as water (a double tilde: ≈) but is green rather than blue. Another object on top of a puddle of vomit will appear normally but on a green background. If vomit and blood puddles exist on the same tile, its color will be brown. Walking through vomit will not affect a dwarf's mood.

Vomit will disappear at the beginning of each season.

It can also be used as a weapon in adventurer mode, much to the dismay of your enemies.