I made some mockups of east-to-west pumps using Unicode characters, but we should really get some full-fledged graphical examples. --JT 07:47, 31 October 2007 (EDT)

Is it essential that the rear of the pump be adjacent to an open square over liquid? I need to do some tests of that, I had assumed from my testing it was sufficient to have the pump just over liquid (so for example, have the rear square on a ramp into a lake) Matryx 13:50, 31 October 2007 (EDT)

Uh, I found that when building a screw pump on open ground, above a mined-out section filled with 7 waters ont he floor below, nothing pumped through until I dug an 'Open Space' next to the pump handle. --Sukasa 20:52, 31 October 2007 (EDT)

I'm going to try this, except I'll use a Bauxite block because I can and there's lots of Bauxite on my map, I'll let you know how it turns out. (My last attempt at pumping magma ended with fire and death; Wood Pipe section, Stone block, I can't recall what kind of corkscrew.) --CrushU 21:27, 7 January 2008 (EST)

Has anyone confirmed the reynard diagram works? I was under the impression he meant it as conjecture VengefulDonut 14:10, 3 November 2007 (EDT)

In the reynard diagram tower are the fronts of the pump over the water on the square besides that?

Maybe this is helpful? 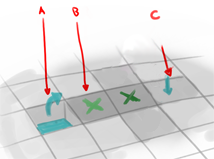 This is an example of a pump facing West in wonderful 3D.

A: A square below the level of the pump without a floor where water is pumped from

B: The point in which a dwarf operates the machine

C: The three points in which water is deposited. MikeWulf

It's deposited only on the far C tile but leaks into the others from it VengefulDonut 09:27, 6 November 2007 (EST)

I can probably do a few of these for the digging article too if it is acceptable.

What program did you use to make that graphic? I wouldn't be able to make something like this unless I had a laser pen or somethin'. Schm0 08:53, 5 November 2007 (EST)

Just OpenCanvas with a graphic tablet. If the wiki wants uniform pictures I could probably do them.

After seeing the new quote on the main page and seeing the bottom of this article, I'm totally opening up a dwarven gym with pumps and, if I can figure out how to make them use it, a swimming pool. -EarthquakeDamage 20:46, 14 November 2007 (EST)

Just added a note that stacked pumps have to be built from the bottom up in order to fulfill their support requirements. This may seem obvious to the initiated, but it frustrated me for quite some time. Doctorlucky 16:26, 16 November 2007 (EST)

I hear while draining ponds, screw pumps appear to create more water than they destroy, allowing some unexpected flooding. Does this mean, then, that you can take a single half-full square of water and eventually recycle it enough to fill a pond? Or is screw pump flooding just greatly exaggerated? --Knivesu 07:00, 3 December 2007 (EST)

Actually got a chance to test it, appeared to create and destroy the same amount. Darn, and I was hoping for an automatic-refilling well. --Knivesu 22:38, 3 December 2007 (EST)

I think I have come up with a slightly more space efficient version of--what I can only assume to be--Juckto's pump tower system. It ought to work with either level as the base level and will use just as much energy as the previous version. I hope that it is useful! --Shimavak 23:00, 6 March 2008 (EST)

I think that with Reynard's design, you would have to use axles at each level in order to run in mechanically; otherwise the water would leak if one were to run a pair of gears up the side the whole way. His is certainly more space efficient... --Shimavak 12:18, 7 March 2008 (EST)

I'm 99% certain that it's pretty much impossible at this point to contaminate a water supply. Heck, any pond shows as a "murky pool" and dwarves will use it freely, and making a pond by flooding a roomful of goblin invaders makes a perfectly usable pond despite the obvious issues of the rotting drowned goblins. So, there shouldn't be any problems either way. Kefkakrazy 20:13, 19 November 2007 (EST)

I'm tired of being unsure of what to call either end of the pump so that other people can understand what I am saying. I propose that we come up with a particular set of terms to define how the pumps are setup in any description or example.

My proposal is as follows.

This will make it easier to tell where the pump faces when only a diagram is given. Such as the following. You can easily tell that the PB is on the left, and thus the pump is pumping right to left.

Is it necessary to thumbnail the isometric graphic? There's no text for it to push out of the way, so it seems odd to use a thumbnail. The general purpose of a thumbnail, I figure, is to float next to text to illustrate the subject in question. If the text has been removed (something I also disagree with: it's important to show what it would look like in DF terms), then the diagram might as well sit at full size. The reduced-scale thumbnail is less clear, IMO. --JT 16:38, 19 April 2008 (EDT)