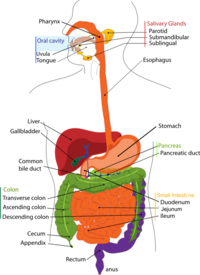 This page details the constituent limbs and organs one can expect to find in a dwarf's body, based on data from \raw\objects\body_default.txt and \raw\objects\creature_standard.txt.

This information is up-to-date as of Dwarf Fortress version 0.47.05.

Hair is common to many creatures, not the least of which are dwarves. Dwarves can exhibit facial hair from birth, though female dwarves do not grow any by default (this mistake can be corrected changed in creature_standard.txt under the token [CASTE:FEMALE]).

Eyes allow dwarves to use their sight to view the world around them, and make decisions based on visual information. Losing both eyes can render a dwarf blind, resulting in a dramatic decrease in situational awareness and crafting quality.

Noses allow dwarves to smell things that emit odors. A dwarf without a nose cannot smell, and will generate no thoughts upon encountering odors - including miasma.

Mouths contain teeth and are used for biting. Interestingly, they are only considered in combat; even if a dwarf somehow loses their mouth, they can still eat meals and talk to other dwarves.

An interesting point to note is that both the mouth and nose can be removed, and the dwarf will still be able to breathe.

Ears are used to hear noises. To a dwarf, the only noises that matter are those from tasks that modify tiles, such as mining, carving/smoothing, and woodcutting. Losing both ears renders dwarves deaf, and thus unable to hear noises.

Brains allow dwarves to think and are critical to survival. If the brain experiences any damage beyond bruising, it may result in loss of consciousness, or even death.

Necks contain part of the upper spine and connect the head to the torso. They contain nervous pathways that are critical to life. Damage to the neck may result in full body paralysis, followed by death.

Throats are the forward-facing portion of the neck. They can be strangled to induce unconsciousness, and contain major arteries that can cause rapid death when opened by attacks.

Arms are used for general physical interaction with the world, including lifting and carrying objects, wrestling with combatants, and grasping items. They may also be used for mobility if the dwarf does not have the ability to stand, which may arise from loss or impairment of the legs.

Hearts are necessary to circulate a dwarf's blood around their body. Without it, dwarves very quickly die; serious injuries such as punctures can also lead to rapid death.

Lungs allow dwarves to breathe. Loss of one can impair a dwarf's stamina, and can cause the dwarf to become Winded when doing basic tasks; loss of both causes death by suffocation.

Stomachs would be used to digest food, but their presence is mostly decorative. A dwarf with a missing stomach can still eat. Strikes to the stomach can cause nausea and vomiting.

Livers are used to determine how well a given creature can hold its liquor. Dwarves have one of these, but it's a very large one; 50% larger, in fact, than the default size, allowing them to constantly drink alcoholic beverages and live happy, healthy lives. A dwarf can lose their liver and still drink quite copiously with no ill effects, so dwarves' ability to resist alcohol poisoning may be based on sheer willpower rather than any biological advantage.

Pancreases would be used to regulate digestion and blood sugars, but dwarven diabetes does not exist, therefore their presence is entirely decorative. They can be damaged, but this is unlikely compared to the stomach, liver, lungs and heart due to their small size.

Spleens would be used to filter the blood, like the kidneys, but they are entirely decorative, like the pancreas.

The lower torso contains non-critical organs that are not immediately important to continued survival. It connects the upper torso and the legs.

Legs are used for standing, walking, running, and jumping. When missing one or even two, dwarves can use crutches to walk, and may even become skilled enough to return to their standard walking speed; however, dwarves who have neurological damage to one or both legs will not use crutches, despite the obvious need.

Guts are considered to be one cohesive unit by the game, and are simulated as such; they represent the small and large intestinal tracts that fill the abdominal cavity. They are considered to be 'under pressure', and thus may be ejected if the lower torso is opened by an attack. Guts being ejected usually results in death.

Kidneys would be important in cleaning the blood and creating urine, but the game treats them decoratively. The kidneys are not life-critical, and one or both can be disabled or removed without much incident.

Limbs and other components of the body are layered in material that helps protect the vital organs and nervous connections that keep the body functioning.

Skin is a protective layer that surrounds most external body parts; the first line of defense from infection and disease, and protects dwarves from contaminants such as blood or vomit. Dwarves with healthy skin will usually wash contaminants off of their skin with water, using soap if it is available.

Subcutaneous fat is held under the skin, where it forms an additional layer of protection against blunt-force and slashing injuries. As Dwarf Fortress' layering system is somewhat abstracted, when a dwarf is set on fire, their fat usually catches alight first, destroying the skin in the process.

Some dwarves can survive burning even when all of their skin and fat is burned off, forming sinewy "supersoldiers" that do not experience pain. They are, however, very likely to die of blood loss before this can be achieved.

Muscles are critical in moving parts of the body, and are the core component in the motoric capability of a limb. Torn muscles can heal over time, but will temporarily reduce or negate the ability of a limb to function.

Sinews connect the muscles and bones together, and include the tendons (muscle-to-bone) and ligaments (bone-to-bone). Sinew tearing will disable limbs until they heal on their own.

Nerves carry impulses to and from a creature's brain. Nerves are connected between body parts up to the brain; if a nerve is severed, all nerves downstream of it will be paralysed or numb. Nerves cannot heal, and once severed, will never reconnect.

Sensory nerves are used to experience tactile sensations in limbs, such as bumps, scratches and touches. Loss of sensory nerves can arise from skin damage and deep cuts, which can render the limb numb.

Motor nerves are used to actuate muscles that move limbs. If an attack severs a motor nerve, the limb and any others connected to it will be paralysed.

Arteries carry blood around the body, typically under moderate pressure. If an attack opens an artery, the blood may spray and spatter walls and floors, and puts the creature in imminent danger of bleeding out if untreated.