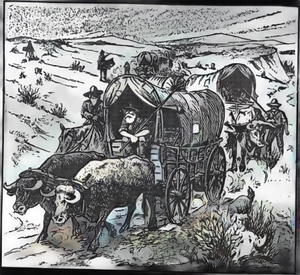 Illustration of a caravan

Caravans facilitate the transfer of goods between sites. Merchant caravans from the Mountainhome and neighboring friendly civilizations will arrive throughout the year, looking to trade, and if you "make contact" with other civilizations by sending a raid to "demand tribute", those civilizations' sites might be convinced to send a caravan of their own afterwards, *on top* of tribute 'caravans' and even if your demand fails. This means you could have multiple caravans in the same season for a given race, possibly at the same time.

Merchant caravans often use pack animals and wagons to carry their goods, accompanied by guards for protection. An arrival of a caravan will trigger an announcement message (at the bottom of your screen) informing you that a caravan has arrived. They will appear on the edge of the map and proceed to move towards the trade depot where they will unload their goods. If caravans are unable to find a path to your trade depot (or if you have not built a depot at all), they will bypass your site. They may also turn around if they become spooked by wildlife or corpses, ambushed by goblins or any other enemy forces, or if it takes too long to reach the trade depot (though that would require weeks of travel while on the map).

Caravans will embark on their journey back exactly one month (28 days) after their arrival, whether they have succeeded in reaching the depot or not. Note that if the caravan team or their animals are delayed and prevented from leaving, they will eventually go insane. Merchants and diplomats go insane if they are unable to reach the map edge within 25 days of having finished their business at your fortress; for diplomats, this is when they end the meeting and try to leave, and with merchants it's when they've finished packing everything up.

Trading caravans are useful for getting supplies not available in the player's fortress area. A caravan from the mountainhome and various friendly civilization you are in contact with will visit the fortress on a yearly basis, linked to one season, which is spring for elves, summer for humans, and autumn for dwarves - no race trades in winter by default.

Caravans will only show up if that race considers the fortress site both accessible (as denoted on the embark screen) and "worth the effort" (as determined by the [PROGRESS_TRIGGER_*] tokens in the entity definition), with the exception of dwarves, who always arrive unless they are extinct.

If your fortress performs a successful Mission to "demand tribute", whether it be one-time or annual, that site will also send a caravan, once a year. They usually arrive at the start of a season, and that season can be specified by you (including Winter) at the time of the mission. No actual "trading" or broker is involved, they simply drop off the goods at your depot and then leave, without speaking to any of your dwarves. Tribute caravans tend to be relatively small, but they are guarded. You don't have any control over the content of the tribute. What they bring depends on the civilization's available materials, the site's size and tracked items and so forth, and may range from excessively mundane (like a bunch of average quality clothing) to extremely useful (like exotic animals). Notably, tributes are one of the few ways to obtain evil animals tamed by goblins such as beak dogs for instance. Yearly tributes usually happen at the beginning of a season and may be arranged at any season, including winter.

As stated above, tributes are also one of the few ways to "contact" another civilization without triggering an outright war and therefore ensure that it will send out regular caravans afterwards, *on top* of the tribute caravans it'll be sending and even if your tribute demand failed.

(* "Tribute" caravans do not Trade - they simply arrive, drop their tribute off at your depot and leave, no Broker or conversation involved or possible.)

Caravans appear to enter the map from a random direction, one which does not necessarily coincide with the relative direction of the originating civilization on the world map, and they may appear from different directions and z-levels each year. However, they will always arrive at a location with a wagon-navigable path* to the Trade Depot when one is available. Site-bisecting features like rivers will limit them to appear on a specific side, if only one side has an accessible path to your Depot.

(* This can and should be confirmed well before the caravan is due to arrive by pressing D. See Trade Depot for more information.)

Caravans can usually be restricted to show up in a specific spot on the map edge, but under some circumstances they will insist on showing up on one particular side of the map. The current theory is that this is caused by major rivers on the world map (i.e. the caravan can't cross the river outside your embark region, so it always shows up on one side).

Also worth mentioning is the pathing behavior of the entire caravan. If one member of the caravan reaches an obstacle in their chosen path (i.e. a raised drawbridge that was lowered when they entered the map) the entire caravan will re-path, instead of encountering the obstacle one by one. This behavior can be useful when attempting to free "stuck" wagons - a trader on foot encountering a locked door will cause the stuck wagons to turn around and path to a different entrance/exit, if available.

If caravans are destroyed (intentionally or unintentionally), the items may remain for use. Caravans caught in a cave-in will flee as if they were attacked, but will leave all the items dropped by the caravan behind. Pack animals carrying items are affected just like a normal tamed mule and must be killed in the cave-in for them to drop items on the ground. It is however much more likely that the pack animals will only be stunned or rendered unconscious, and flee shortly after recovering from the hit.

While caravans can defend themselves, they don't like being ambushed. If a caravan becomes terrified by wildlife or horrified by corpses it will turn around and flee the map. Any event resulting in the death of any merchant or pack animal will also cause them to retreat and forget about trading with you for the season. Repeated caravan destruction (intentional or unintentional) will strain diplomatic relations and may result in a siege.

Ambushing or seizing a caravan and letting a survivor escape seems to have a more detrimental effect than simply annihilating the whole caravan. (Presumably because you've left a witness to report what happened.)

Overall, a given caravan visit can have a number of "problems" which will affect your relations with their civilization:

All of these will make the parent civilization unhappy, though some more than others. They take offence to both accidents and hostile acts - accidents just annoy them slightly less. In the case of elven merchants, they will take offence to your actions and bring fewer goods next year, do it too many times and they will declare war on you.

If a caravan has arrived at your trade depot and is unable to leave for about two months after they finished packing up their goods, the merchants and animals will go insane. This can result in a bunch of merchants attacking your dwarves, or just standing around moping until they starve to death. It is not known for certain if this hurts diplomatic relations, but most likely it's the same as any case where the entire caravan fails to return home.

If you have locked the caravan into your fortress to hold out against a siege, it's a good idea to station a squad of soldiers near the trade depot in case the merchants go berserk. You may also want to make the depot a restricted area to encourage civilians to go around it. Alternatively, you can design the trade depot using drawbridges, so that it can be sealed off from the rest of the fortress during a siege.

Merchants can leave the map from any map edge-- including underground and aboveground map edges. If an unobstructed path through your fortress reaches a cavern edge, then blocking all overland paths will cause the merchants to depart underground. This can be useful, if you're suffering a prolonged siege; it can also be dangerous, if your underground regions are less secure than your surface. While it requires more preparation, an elevated bridge to a map edge can also allow merchants to depart in peace.

Caravan guards cannot be starved, dehydrated, or driven to insanity if prevented from leaving, their employers and animals can, however.

If a large amount of items is sold / offered to the caravan, it may take a while to load it all, especially if you chose to keep your precious bins and traded your items individually.