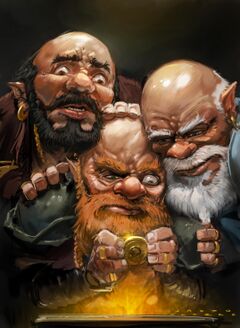 Missions are commands in fortress mode that send one or more of your dwarves, in military squads, to visit sites off your fortress map. Missions are created in the Civilization/World Info screen (accessed by pressing c in the main fortress view). There are multiple types of missions, such as raids, explorations, and artifact/citizen recovery.

Note: This is all done "off screen" - you have no control of the dwarves' actions once they leave your map, not until (with luck) they return.

A raid is both the general and default term for any type of mission to an occupied foreign site, usually in the name of pillaging artifacts and death-dealing (although artifact looting seems to be the primary focus of most raids).

An exploration is essentially a raid on any unoccupied site. There are no social considerations, so no options to demand tribute or attack, you're simply traveling to a ruin to search for artifacts to grab. This can include explorations of sites previously inhabited by your civilization.

Both raids and explorations are created by opening the civilization/world Info map, then using the up/down/left/right keys to navigate around the map to select your target. If the site you're viewing holds or is rumored to hold artifacts or prisoners, these will be listed, along with the distance in time to the site ("a short trip", "a day's travel", etc.), the race, population, and your current political state (peace, neutral, allied, etc.). At the bottom of the screen, a prompt gives you information about the type of mission you're creating (i.e. 'r: Raid/Explore this site'). If a site is unable to be visited, the prompt will appear grayed out, and the text will explain why you cannot create the mission.

Missions cannot be sent to occupied sites that are members of your civilization, or locations that are impossible for your squads to reach (i.e. across oceans/glaciers), but can be sent to unoccupied/abandoned sites, as stated above. If all is well, you can then press r to create the mission and move into squad selection.

Squads on missions that are across a body of water (though not totally cut off by it such as with an isthmus) will sometimes route through the water.

In addition to a default "raid", you can check details to choose a different sub-type of raid:

Neighboring Civilizations:
Now, before you launch your first squad to crush your enemies and see them driven before you, take a look at your target in the holdings screen (under civilizations). This shows the political situation. All target locations with the same icon - even ones that are not attached - are holdings of the same civilization. So, if you go to war with that tiny, isolated hamlet with a population <10 next to you, you're also going to war with the entire civilization represented by all other squares of the same icon, near and far. And the map is not static - all those other, larger civilizations are looking to gobble up the smaller ones, just like you might be. Therefore, act fast, but act wisely, and consider your options!

In a raid, your dwarves will attempt to sneak in and steal items from the site, especially if they're artifacts. The raiders' ambusher skill will affect their chances of success; if they are spotted, then they go into battle as if they were on a Pillage mission. Each dwarf on the mission will gain experience in ambusher skill, regardless of the outcome, so it may be useful if you want to raise that particular skill quickly. If you send someone to raid a site while they have a baby, the baby will go with them and also gain Ambusher skill.

On a pillaging mission, your dwarves will openly attack the site, and if successful will result in your dwarves stealing livestock and loot if you have those options selected in the [d]etails menu. Pillaging uses the military tactics skill of each army's highest-leveled tactician, giving the side with a better one major advantages in the battle.

When razing a site, your dwarves will both openly attack and attempt to destroy the site, resulting in a more prolonged attack. If you are sure that your army will win against the opposing one, and you want that site gone, a razing mission is probably what you want to perform. Your dwarves will still bring home loot and livestock if you have these options selected. Like pillaging, a razing mission uses the military tactics skill.

Demanding tribute (one-time or ongoing) may result in the site providing goods to your fortress (if successful). They will do so in the form of a caravan that will drop off the goods at your depot and leave. Tribute caravans tend to be relatively small, but they are guarded. You don't have any control on the content of the tribute. What they bring depends on the civilization's available materials, the site's size and tracked items and so forth, and may range from excessively mundane (like a bunch of average quality clothing) to extremely useful (like exotic animals). Notably, tributes are one of the few ways to obtain evil animals tamed by goblins, such as beak dogs, for instance. Yearly tributes usually happen at the beginning of a season and may be arranged in any season, including winter. Demanding tribute is one of the few ways to "contact" another civilization without triggering an outright war, and therefore ensure that it will send out regular caravans afterwards.

Conquering a site relies on military force, while demanding surrender relies on negotiation under the threat of military force. If your demand of surrender isn't successful, your dwarves will then attempt to openly attack the site. There is no visible drawback to not always demanding surrender beforehand, and taking over sites with minimal bloodshed can be surprisingly easy, especially for the low-population ones.

If successful, occupying a site will make it one of your fortress's holdings. Note that your forces will remain on-site as occupiers. One of them will then claim the title of administrator of the place, "after a polite discussion with rivals". (This will be announced in a lovely purple message.) The previous administrator of the place will also likely be killed by your dwarves, as is standard in the conquering mechanics of Dwarf Fortress (in worldgen and afterwards).

You may request (through a messenger) that your occupying dwarves come back to your fortress, but the administrator will remain there regardless. Dwarves that you request this way will still have the labor preferences you've enabled for them prior to sending them out, but won't be part of a squad, so you will have to re-enlist them after they come back. There is also no guarantee that they will wear the same equipment as they had when you sent them out, so you may not be that keen on strapping them with very valuable gear after all. Note that insurrections are explicitly disabled for your holdings, so at the moment there is no drawback to not requesting every single occupying dwarf to come back to your fortress (apart from FPS concerns).

An artifact recovery mission sets a specific artifact as the objective of a mission. This usually involves traveling to the last known or rumored location of said artifact. If your squad manages to encounter a bit of fun on any form of mission, members of those parties can be captured as prisoners by the inhabitants of the site you attempted to raid. When this happens, you can create a citizen recovery mission, whereupon the assigned squads will attempt to rescue the prisoner from whatever site they are held at. Captive citizens can join civilizations that captured them, so your next raid to the same site can be met with your own armor-clad legendary warriors as defenders, leading to unexpected fun.

You can also instruct your squad to free members of other civilizations you find at your destination. These other prisoners you rescue will come back with your squad and seek sanctuary at your fortress. Sometimes, even uninhabited tombs can contain "prisoners" that you can rescue. If you accept their request, these prisoners will become partial citizens. These units will have all basic labors enabled (such as hauling, construction, and the like), and will have any labors they are skilled in set to active with no way to deactivate them. Consider setting your workshop profiles a little more aggressively than normal if you don't want them filling orders reserved for more capable hands.

Artifact recovery and citizen recovery missions are created by selecting the desired recoverable from either the missing citizens menu (accessible with p) or the artifact menu (accessible with a). Once you've selected something, press r to create a new mission, and move into squad selection. Although you can technically select recoverables that belong to sites of your civilization, squads on these missions will almost instantaneously return, and will deliver no report data.

Squad selection, as the name implies, simply involves selecting a squad (or multiple squads) to be sent out on the mission. Even if you do not select any squads by exiting the selection, the created mission will remain extant and active, albeit with no squads assigned to it.

Once an active mission has one or more squads assigned to it, the dwarves in those squads will automatically prepare themselves and leave the map's edge.

Depending on the civilization you are raiding/razing, the loot may change. For example, when you are raiding elves, you won't get metal items; you will mostly get grown wood items instead. This also applies to livestock: Raiding elves may result in the looting of many different types of animals (all tame). When raiding goblins, you will, interestingly, be able to obtain tame beak dogs, which are only trainable by dwarves, never tamable.

Missions can be put to various uses. Demanding tribute from civilized sites succeeds more often than not. and ensures you receive plenty of caravans from that site's parent civ, on top of the tribute. As there is no functional limit to the number of civilizations you may be in contact with, you may find your trade depot becoming very busy all year round. Your fortress can potentially specialize and rely exclusively on imports for self-sustainability, which was impossible or at least very fragile to do in previous versions. The tributes themselves, while fairly random, often aren't too bad and can easily kickstart animal breeding programs that your fortress wouldn't have access to otherwise.

Occupying missions are also an indirect way of population control (that nicely contrasts with the previously messy ways one had to resort to in older versions), which is always good for FPS. They also act as a way to get rid of potential trouble dwarves - usually night creatures, unhappy dwarves and nobles - since they will either stay at the conquered holding (or die in the attempt) - out of sight, out of mind. Acquiring a bunch of holdings this way is also relatively quick and easy and lets you fulfill the requirements for a barony, county, etc. faster.

Artifact looting is also fairly random but is a convenient way to accrue wealth and fill your library. Books containing useful knowledge (currently engineering and medicine) can be used to (slowly) accrue experience and some books have very special effects indeed - see secrets for a guide on how to determine which books contain the secrets of life and death and thus will turn your dwarves into necromancers.

Missions also give you a greater degree of control on how much invasion related fun you want - if a civilization gives you too much trouble, you can take the fight to them and attempt to raze their sites. Conversely, if you're getting bored, pillaging a bunch of sites is likely to provoke some kind of retaliation.