This page is about the noble-appointed position and its room requirements. For more information on the military side of a champion, see Soldier.

A champion is a noble position appointed by the player to a dwarf. The chosen dwarf can be freely replaced. The champion will lead combat demonstrations in barracks, much like a militia captain would. This position has no room requirements and the dwarf selected needs no special skills or qualifications, and does not need to be active in the military. However, teacher skills could prove useful.

In previous versions of the game, champions were dwarves that had achieved a legendary combat skill. This is no longer the case - such dwarves are now called heroes - and any dwarf can become the champion after your fortress becomes a barony. 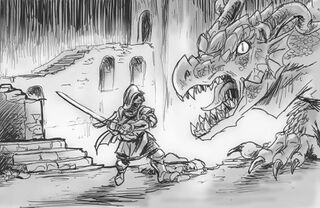