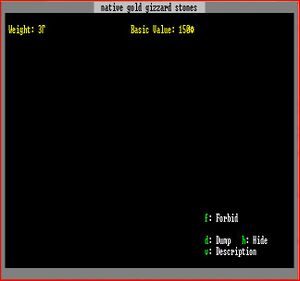 A gizzard stone (or gastrolith) is a rock ingested by an animal and held within the gastrointestinal tract for the purpose of grinding food or providing ballast. Gizzard stones are supplied by butchering specific animals such as ostriches and cave crocodiles; the material of the stone is randomly selected, and may include materials not otherwise available on the map. Gizzard stones are treated as cut stone gems, suitable for encrusting goods and furniture. Gizzard stones can be farmed as a renewable supply of decorations to increase the wealth of your fortress. Elk birds are among the more common creatures that drop gizzard stones. Oddly enough, numerous animals, such as the giant kakapo and emu, yield a gizzard but not a gizzard stone.