The central feature of the 'villains release', intrigue is a collection of mechanics and tools that enable historical figures to enact villainous plots, ensuring a constant stream of Fun for players. As of .47 interaction with this feature is still somewhat unfinished, with the January 2020 devlog indicating missing elements.

You can export a villainous network from the historical figures list in legends mode, as shown in the image below:

The civilizations in world generation also have some basic counter-intelligence abilities, and though it's abstract like the rest of world generation, the spy masters and law enforcement position holders, like the villains, have to work in a more-or-less fair fashion to earn their victories. The game keeps track of the evidence they've collected from witnesses, interrogation and surveillance, and this gives them leads on further steps to take, in terms of who to surveil and who to interrogate.

Members of these villainous networks, known as organisations, will occasionally visit your fortress with the intent of corrupting your residents to take part in plots. Unless you successfully interrogate them through the Justice screen, there will be no indication that the visitor has nefarious intentions; they may also use one or more pseudonyms, so any names of members acquired from previous interrogations may not be enough to identify them.

Note that trying to interrogate a merchant can cause a wagon to fall apart.

Corruption of residents is based on the initiator and recipient's social skills, much like interrogation, and if the corruption is successful, the recipient will become a part of the organisation, taking their part in whatever plot the organisation intends to enact within your fort.

An interrogator can interview somebody that corrupted them. However, no crime report is generated, nor is the organization added to the counterintelligence screen.

When interrogating a performer you granted long-term residence to as part of a troupe, they can "confess" this fact. This will show up as "A plot" in the Plots screen, despite it not being a plot at all.

The following is an incomplete list of potential plots an organisation may enact: 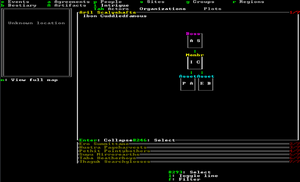 Image showing a villainous network in adventure mode. This network consists of the master, a member (who is the master's childhood friend, incidentally), and two assets, which are position-holders corrupted into providing funds to the network.

Intrigue in adventurer mode is mostly interacted with through the investigation and interrogation menus. There are two major investigatory tactics: Persuasion and Intimidation. Adventurers who wish to investigate benefit from the judge of intent skill as well. Currently, only asking for schemes will result in proper information appearing in the quest log.

You can interrogate criminals after killing them, at least if they're intelligent undead.

Persuasion mainly uses the persuade skill. Complementary to that are the flatterer (for flattering), comedian (for making jokes) and pacifier (for calming down) skills. You will want to make jokes and flatter an NPC to get them into a positive mood. Use pacifier skill to reduce impatience down to patient. After this, investigate using the persuasion tactic.

Intimidation mainly uses the intimidate skill. To make intimidation more effective, you can fight with nearby NPCs, or the particular NPC in question. To avoid killing the NPC, make sure that you stay within the brawl escalation level - the NPC will rapidly become afraid of you. After this, investigate using the intimidation tactic.