Mass pitting refers to pitting many caged creatures at one time without having to build each cage and link it to a lever. This allows you to recycle many cages quickly, freeing them up for reuse in cage traps in minimal time.

Also called the 'Mass Cage Recycling System'. Is a simple design that keeps you from having to build cages before releasing hostile creatures from them. This is safe for most hostiles, but see warnings below.

Warning: There have been multiple reports of hostile creatures escaping confinement while pitting. In previous versions, only "thief" type creatures, flyers, or large creatures like titans would escape using this system. The (highly likely relic, per 0.47) 0.40 behavior is still being investigated. If in doubt, build the cage manually or have sufficient military hanging around the top stockpile area.

The bottom room, the pit, can look like whatever you want as long as all of the openings you channeled out lead into it from the ceiling. Obviously you can scale the design with more or fewer hatch openings to get a larger or smaller stockpile area in the upper room, but a 6x9 room with 6 hatches in allows you to empty out 48 cages very quickly, without spooking dwarves, which is ample for most players - ymmv.

Variations of this design exist, but they all use the same basic principle - that is, all hostiles in cages must be directly adjacent to a suitable pit. Dwarves must not be required to haul hostile creatures across any distance or else they can become startled and release the dangerous creature, then free to do as it will.

Before pitting your captives, you may wish to disarm them -- depending on what you've built for them to fall into.

Now, wait for the stockpile above to fill and assign creatures to the pit all in one shot. Being pitted through the hatches will keep dwarves from being spooked by hostile creatures below, and with all cages directly adjacent to pits, creatures can be dumped in instantly without having to be led around.

A mass of dwarves will pile into the room, pit the creatures at about the same time, and haul the empty cages off to your empty cage stockpile. The poor pathetic creatures they pitted will then be left to the mercy of whatever is at the bottom of the pits.

After your dwarves have dumped out the cages the inhabitants will be dropped into the room below. Here you can find some suggestions on its construction:

One of the simplest and most reliable ways of ensuring the death of non-flying creatures is a very long drop (at least 20 z-levels but deeper is better). All but the first z-level can actually be staircases as a creature which has started to fall will continue to fall unimpeded by staircases. Using up/down stairs instead of channeling significantly simplifies construction of long drops and only the first z-level need be channeled to initiate the falling.

Consider dropping victims all the way from the surface to the magma forges for ease of smelting goblinite, such a long fall will guarantee death of the victims and the gibs can be thrown into the magma. A stockpile with give orders can be created at the impact site to help ensure gibs and things to be melted are automatically sent to the correct destinations and not for example hauled back up to surface stockpiles.

Fill up the room below with water and watch as the invaders drown. Requires only some buckets and a water source. May be difficult or troublesome to recover anything dropped into the waters below. Consider a filling and draining method using floodgates bordered by fortifications. Ensure that the hatches over the openings are permanently set to forbidden, otherwise things can and will swim back into the room above resulting in fun. Dwarves will not have an issue dumping things through the forbidden hatches.

This is a possible drowning pit where water flows through a tunnel to the right and drains out the left. Be sure they are hooked to separate levers, and remember the fortification keeps dead things from flowing out, not live things from swimming out. A door along the bottom of this design allows dwarfs in to loot the spoils, and or clear out any unwanted buildup of bodies ETC.

Alternatively, you can fill the room with magma and watch as the hostiles are instantly incinerated! Requires an aqueduct and/or magma safe materials.

On the level below the pit opening place weapon traps in a 1 square wide hallway. The dumped creature will run for the exit through the weapon traps until dead. You can put a cage trap at the end just in case the creature successfully escapes with his life.

Leaving the room down below empty has its benefits. When your melee military has nothing better to do beating unarmed goblins will train fighting skills quickly. Be sure to haul off corpses before miasma begins forming. If you are planning to kill your goblins by pitting them into an empty room, remember that height alone is not a reliable method of enemy disposal. Even if your empty room is 10-15 z-levels below, you will still get a high number of survivors and some will escape unharmed - especially when falling on top of enemies pitted previously.

Through the use of spike traps, goblins can be trained in the same manner as a standard danger room. Uses for these master goblin fighters include extended target practice, an expendable military addition to be dumped on particularly nasty forgotten beasts, or a last resort contingency plan against non-goblin invader-induced fun. 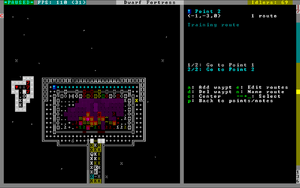 By lining the pit room with fortifications you are able to safely train your marksdwarves. This provides a feasible and quick alternative to the slow process of using archery targets. By ordering your military to use bone bolts and leaving your hostiles fully armored even a small group of goblins will live to be used as target practice for months. Miasma produced during this time may give dwarves unhappy thoughts. To avoid this stagger fortifications with solid walls in such a way that diagonal gaps are between you and the rot.

Remember that goblin marksmen will still be able to shoot through fortifications if they are armed sufficiently. To avoid this exclude or disarm them.

Also remember that you must keep civilians out of sight of the fortifications. Despite blocking the pathing of the hostiles, it does not prevent civilians from canceling jobs when they see the baddies through your fortifications.

An underground pit built with access to the edge of the map can reliably convince invaders to simply leave the map of their own volition (after being relieved of their possessions). This unusually humane method works best with a drop short enough to not significantly maim and immobilize deportees, and a backup atom-smasher can deal with any stragglers. Enemies hostile to each other should not be pitted at the same time, since creatures currently in combat are less likely to wander off-map.

In order to protect frame rate, spread of miasma if you are using this for melee training, gather any remaining loot that was not removed before pitting the creatures, or simply a desire for fortress cleanliness, you can make a bridge as part or all of one wall to the pit. When retracted it acts as a wall and removes any danger of escaping prisoners, but when all are dead or sufficient military is waiting, you may lower this to retrieve any bodies or valuables. If you do not like having a pit unavailable during this time, you may consider building a second to alternate uses between which one is being filled and which one is being emptied. Another alternative is to build a raising (instead of a retracting) bridge and use it to atomize all of the miasma producing corpses instead of hauling them topside.

It is possible to automate a mass pitting system with minecarts. Minecart "shotgunning" is when a minecart traveling at significant speed encounters an obstacle and "launches" its contents. Cages which were in the minecart, and which encounter an obstacle while traveling at significant speed will similarly "shotgun" their contents, launching their inhabitants. This can empty an entire minecart full of cages simultaneously, without fear of escape. Note, however, that flying creatures may still be problematic.

To do this a simple 2 stages design exists. 1st - shotgun cages out of a minecart 2nd - shotgun creatures out of the cages.

3. When the minecart hits the forbidden one, the cages will be injected through the fortification into chamber C-6

4. When the cages hit the right wall, the caught creatures will be injected into chamber D-5