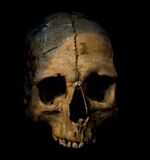 There is one inside you. 💀

Skulls can be obtained from the corpses of dead creatures and as a by-product of butchering. Most creatures have one skull, but some have none and others have up to seven.

Skulls can be processed into totems at the craftsdwarf's workshop. They cannot be used as substitute "bones" in creating bone crafts.

For totems, the value of the original animal is very important. Like all creature byproducts, the skull value is scaled by the modvalue of the creature.

In the current version of Dwarf Fortress, skulls are somewhat easy to shatter. Lucky head-punches can slay even your greatest dwarves.

There are two main myths regarding the unique, paper-thin structure of a dwarven skull. Logical dwarven philosophers and religious philosophers disagree as to which is valid.

The 'rational' group attributes that the reason a dwarf has such a weak skull is also why the beard is so strong; as dwarves cannot physically sit down, kneel or lean, they tend to remain mostly upright their entire life. This caused a gradual change throughout the early generations as gravity brought the skull plating down from their heads into their beards.

The other group theorizes that when the First Mountain King of the dwarves was shot from Armok's womb, he plummeted from the sky many z-levels high. The fetus smashed into the ground, head-first. This also explains the dwarves', ahem... peculiar mental state.